How’d the Reading Go, You Wonder?

So I mentioned that I’d be reading from Imaginary Girls for the first time out in public this week. Are you wondering how it went? 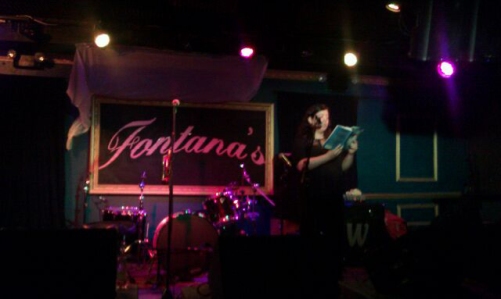 The day of the This Week in New York 10th Anniversary Party was a thunderous downpour of rain. I joked that it was very fitting to my novel that the streets were flooding, though I also worried that the rain would keep people from coming. The worst part about doing readings is worrying if anyone I know will show up. I get just as nervous about that as I do with the stage fright. (But you know who did come? My mom and her friend—from upstate!—and my sister and her boyfriend—from Philly! And even an uncle I haven’t seen since I was a kid!)

I really have done readings before. By how nervous I must have looked in the minutes leading up to taking the stage, anyone watching might have thought I never have. But I’ve read my fiction in many places—at a community center, at an art gallery, at universities (more than once), at a theater, at a museum, in bookstores, in your garage… (Kidding. One place I haven’t read is a garage.) I love doing readings. I just get very nervous beforehand. I always do. I get nervous right until I open my mouth to read. Then I’m pretty much fine.

I got up there and took the mic and looked out into the room and couldn’t see a thing—everything had been swallowed up in darkness. I always make E sit near the center of the room so I can look at him when I’m reading, and give him a signal if it’s going horrible so he can set a distraction, heh. But that night it was too dark to see him.

Then I saw her flit by. My sister was tasked with taking a photo on my phone of me on stage and she did from one side of the room, then sat in a chair toward the front. By some magical cast of the light I was able to see her, the edges of her, enough to know she was there.

So I looked out and read to my sister. It was perfect and I’ll never forget it. 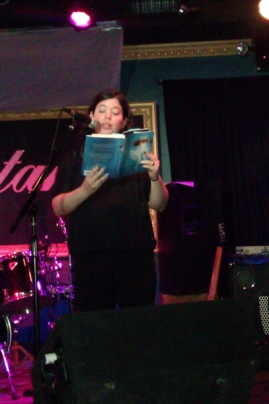 The night was a celebration of the 10th anniversary of This Week in New York—a fantastic source of all arts happenings in the New York City area, and it was such an honor to be included in the great lineup and share my book with everyone there. The rain didn’t keep people away, and I finished the night completely inspired by the other readers and performers, relieved that I’d read, and thrilled that I’d read, and so happy with how it went.

The event was held on the basement level stage of Fontana’s bar, and my cell phone didn’t get service down there. So it was after the reading, still thrilled that I’d done it, that I climbed the stairs to the main level and checked my messages and emails. There in my inbox was an email from my editor. The subject line sent a jolt through me: “Starred Review from BCCB!”

Wow. So at the very moment I was reading the opening of Imaginary Girls in public for the first time, we got the news that the book got its third starred review. Here’s a bit of what they said:

‎”An ominous, delicious tale that’ll scare everybody away from swimming for the summer, if not eternity.” —The Bulletin of the Center for Children’s Books (starred review)

Here I am, minutes after coming off the stage, with my wonderful E, my adorable mom, my beloved sister, and her awesome boyfriend: 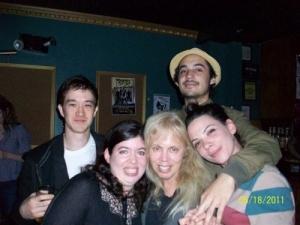 I’m off Twitter and Facebook till Monday (though this post should automatically feed there, like a ghost giving you a whisper that I’m still here somewhere), but I want to say I’ll be out in public once again on Monday:

The NYC Teen Author Carnival will be at the Mulberry Street Library starting at 4pm on Monday, May 23. I’ll be on the “Otherworldly Adventures” panel and then after I’ll have some Imaginary Girls ARCs to sign and give out, plus some bookmarks. I’ll also be holding a giveaway for a signed copy of the hardcover, once it comes out June 14. If you’re there, come say hey.

Check out the new appearances page on my newly redesigned (!) website. More events will be added soon!

All these Imaginary Girls things are happening and I’m really thrilled—like REALLY thrilled—but there’s one thing I need to be doing right now and that’s finishing my new book. I’ll try to keep blogging though. Have a great weekend!

3 responses to “How’d the Reading Go, You Wonder?”