There’s a magical dystopian YA trilogy I want to tell you about, one that starts with a book called The Line. If you haven’t read the first book, here’s how the story starts:

Rachel lives with her mother on The Property. The good thing about living there is that it’s far from the city where the oppressive government is most active. The bad thing, at least to most people, is that it’s close to the Line—an uncrossable section of the National Border Defense System, an invisible barrier that encloses the entire country.

She can see the Line from the greenhouse windows, but she is forbidden to go near it. Across the Line is Away, and though Rachel has heard many whispers about the dangers there, she’s never really believed the stories. Until the day she hears a recording that could only have come from across the Line.

It’s a voice asking for help.

Who sent the message? What is her mother hiding? And to what lengths will Rachel go in order to do what she thinks is right?

I’m excited to say that The Line has a sequel that just came out in September. It’s called Away—and today I’m interviewing the author Teri Hall and giving away both books. That’s right! If you comment on this post, you have the chance to win Teri Hall’s dystopian debut novel The Line in paperback and its sequel, the magical Away, in hardcover!

I don’t want to reveal too much about the sequel—so I don’t ruin it for readers who haven’t read The Line yet—so I’m not including the book summary below. But click this link and you can read about what happens in Away here.

Now it’s time for me to ask Teri some questions! 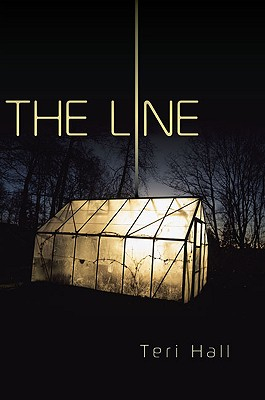 Teri, I should start off saying what happened to me when I first discovered your debut novel THE LINE. I’d heard about it—from the Blue Boards—and I was utterly intrigued by the striking cover, but I first picked it up from the library when I was away at a writers colony one spring. That spring I was so hungry for books, I quickly ran out of the ones I’d brought with me and had to get a library card in town to keep up with my appetite. I remember seeing your book face-out on a display and grabbing it and then holing myself up in my writing room. It was quiet hours during the day, and I should have been writing, but I couldn’t stop reading your book. I remember the exact view out the window from where I was sitting, I remember the feel of the light on my face as it grew darker and the afternoon wore on so I had to put the lamp on, and I remember being unable to stop reading until I reached the last page. I kept thinking about it after, too, and was so excited when I heard about the sequel, AWAY. Since I have such a clear memory of where I was when I read the first book, tell us where you were when you wrote it. What is your writing space like? Your writing routine? Was THE LINE the first novel you wrote or did other manuscripts come before it?

Teri Hall: Wow, you seem to remember much more about your experience reading than I do about mine writing. For The Line, I was in several places while I wrote it, because I moved in the middle of it a couple of times. Still, all of those places involved a desk, a computer, and silence. I can’t write with music, or with any kind of distraction really. Birds chirping outside is about all I can handle, or rain falling.

My writing routine? That changes. Sometimes it’s weekends only, sometimes it’s late into the night after my day job. It always involves moving a cat or two from in front of the computer monitor.

The Line was my first novel.

The sequel for THE LINE just came out last month—and it’s completely my fault for not having these interview questions ready for you sooner, so I hope my blog readers forgive me—but I have to say, I love the direction you took AWAY. We’ve crossed the Line and seen what’s on the other side. There are now new dangers and questions about where the Others get their special abilities. Do you see this story as continuing on, beyond the confines of AWAY (zipping my lips to avoid giving up any spoilers, but yes I’m hoping for a Book #3)?

What was it about writing a dystopian story that called to you?

For me, dystopians ask big, important questions. What is love? What does it mean to truly courageous? Why is there, inevitably, a “them” and an “us” and how might we change that? Is it even possible? I love these sorts of questions, love sitting around talking about them with friends, and exploring them is easy to do in a dystopian story.

(And yes, one way or another there will be a third book—it’s a trilogy.)

Was there a spark from our world of today that inspired you?

Far too many.  Our world is starting to resemble the world in The Line in too many ways.

Which side of The Line do you find yourself connecting to more as a person? And which intrigues you more as a reader?

I connect to both—the people on each side are just people. I do have to admit that if I had to pick one side to live on, it would probably be Away. A little less hypocrisy there, and perhaps a little more possibility.

Did you always intend to write young adult novels?

What inspired you to write for teens? And—I do think this is connected—what did you write and/or read when you yourself were a teenager?

I like writing for young people because I think they are asking big questions. Remember when you were figuring things out and you had all those huge feelings and you thought all those huge thoughts? I still feel like that so much of the time that I guess it just felt natural to write for other people who do, too. I’ve had such wonderful conversations in classrooms with kids who have read The Line in class.

However, I don’t think young people are the only people who want to think about these things. Judging from my emails, lots of adults are reading The Line and the sequel, Away.

When I was a teen I read things like Watership Down (Adams) and lot of the Pern series (McCaffrey). As a younger child I loved The Borrowers (Norton). So I guess I have always loved being transported to another world, where everything is strange.

For a writer who is deeply intrigued by dystopians—and yet has not written one, and is probably afraid to—could you give some advice on world-building? How do you create a new possible future and make it believable?

Hmmm. I think for me it’s all about extrapolating in terms of thinking about what could happen. If we had technology that identified each individual by their genetic make-up, which was then recorded, what might we call that? Genetic Identification? Would we shorten that to Genid? How would a government control the population, who would be privileged, what would be restricted?  All of those things just sort of come out while you write. I am not a writer who likes to spend a lot of time explaining about the world the story is set in—I just have the characters populate it and give the readers credit that they will be able to follow along. It seems to work pretty well.

Did you need to do a lot of planning before you started writing?

I don’t do a lot of planning before I write, and even when I do a snippity outline, things tend to change as the story unfolds.

What do you see in your own future… as a writer? What can your readers expect you to tackle next?

I hope I get to write more and more. I’m working on the third in the trilogy, and some other things are simmering in the background.

THE LINE is now available in paperback from Speak and its sequel, AWAY, just came out in hardcover from Dial in September. You can visit Teri online at www.terihall.com and follow her on Twitter.

Thank you so much to Teri for being patient with me and answering my questions!

And now, do you want to win the paperback of THE LINE and the hardcover of AWAY? To enter, just leave a comment on this post. That’s it. Your comment can be anything—just make sure your email address is entered in the comment field (it’s private and only I can see it) or make sure an email address is in your comment so I can reach you.