By Kurtis Scaletta, author of THE TANGLEWOOD TERROR

The best way to read H.P. Lovecraft is to be fourteen, lonely, and  already scared. Fortunately, the second two come with the first. 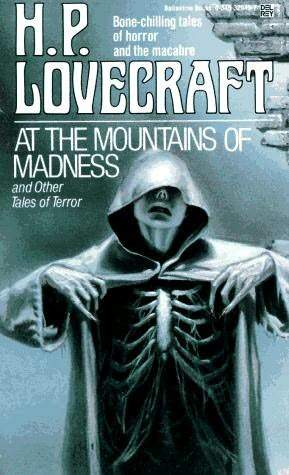 It also helps to be handed Lovecraft by a cool older kid, somebody who seems worldly and in the know. In my case, it was John, a sophomore who lived upstairs in our apartment building. He gave me a dog-eared paperback of stories as if it was contraband. It was called At the Mountains of Madness. The eponymous story made up half the book, and gives details of a band of Antarctic explorers as they discover: first, an ancient and frozen city among the glaciers, of gigantic proportions; then, a series of ghastly beings, including monstrous blind penguins and a huge blobby thing that’s all eyes and mouths and able to devour everything in its path. That creature is called Yog Soggoth, one of Lovecraft’s monster gods, which lie deep in oceans and concealed in the earth, waiting and slumbering… Only the squidlike Cthulhu is more famous.

They make for ponderous readings, do Lovecraft stories. They follow a regular but effective formula of half-crazed narrators gradually exposing the horrible experiences that maddened them. His brilliance is not just for inventing new monsters, but for giving the reader the idea that these were only glimpses of a brutal and vast cosmology; a universe that belongs to them and not to us. That knowledge ruins the men who live to tell the tale—they survive, but are lonely and desperate, aware of the fissures in the thin line between the illusory world in which people live and the cold, unspeakable horror beyond. No wonder adolescents can relate.

But (like adolescence), Lovecraft’s work is not only terrifying, it is weirdly empowering to the patient reader. If you read the entire oeuvre, you can piece a bigger picture together like a puzzle. Half the pieces are missing, and much of the rest are partially obliterated by seawater and smoke from ancient accidents, but you start to get a sense of his cosmology. This gives an ambitious adolescent a feeling of cerebral power and literary accomplishment. Lovecraft’s work can be read in its entirety by a committed fan and attain lay expertise on the monster god mythos to wow younger teens. Within a year, I was that guy, though I still wasn’t as cool as the guy upstairs.

Kurtis Scaletta is the author of the Lovecraft-inspired The Tanglewood Terror and two other middle grade novels. He has a Lovecraft pastiche here.

23 thoughts on “Guest Post: An Author That Scares Kurtis Scaletta”