2012 YA Debut Interview: WHEN THE SEA IS RISING RED by Cat Hellisen

It’s Week 2 of my 2012 YA Debut Interview series! My favorite part about a new year (besides building a wobbly tower of unrealistic expectations for how much I’ll write in the coming year, yay!) is the thought of all the new voices I’ll get to discover. There’s a whole crop of debut YA novelists coming out with books in 2012, and I can’t wait to read them! So, to share my excitement with you, I’m doing a new series of short interviews on this blog.

From December 5 through December 16, I’m featuring ten Winter/Spring 2012 debut authors who wrote books I want to read! Look for giveaways accompanying these interviews—as well as a chance to win a pre-order of your choice at the end of the series. Last week I featured five debuts… and this week I’m featuring five more.

Cat Hellisen, author of When the Sea Is Rising Red (Farrar, Straus and Giroux, forthcoming February 28, 2012) 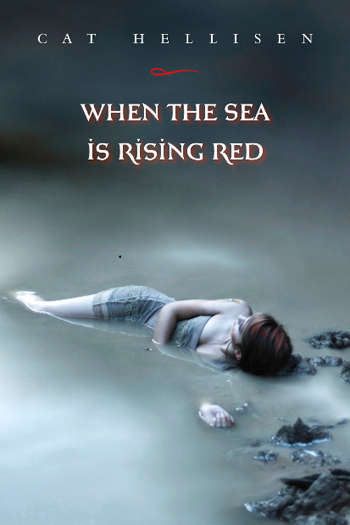 I’ll start with the dreaded question you may be hearing already from strangers on elevators, long-lost family members, and your doctor while you’re sitting on the examination table in the paper gown during your next checkup: “So what’s your book about?”

In sixteen-year-old Felicita’s world, magic is strictly controlled—or so those in power like to believe. After her dearest friend, Ilven, kills herself to escape an arranged marriage, Felicita chooses freedom over privilege. She fakes her own death and leaves her sheltered life as one of Pelimburg’s magical elite behind. Living in the slums, scrubbing dishes for a living, she falls for charismatic Dash while also becoming fascinated with vampire Jannik. Then something shocking washes up on the beach: Ilven’s death has called out of the sea a dangerous, wild magic. Felicita must decide whether her loyalties lie with the family she abandoned . . . or with those who would twist this dark power to destroy Pelimburg’s caste system, and the whole city along with it.

In my experience, every book wants to be written differently—and each one behaves differently from the one before it. Some novels like it out of order, and some rigidly insist on being written from start to finish. Some novels come out fast; others are excruciatingly slow. Some novels torment you, and some sing you to sleep. What did your novel want? Was there ever a moment when it misbehaved?

I do try and block the actual trauma of writing out of my mind, but I think it went okay. I wrote it in order and then had to cut the final third and do a complete rewrite. It also went through a lot of revisions before it actually sold. My story needed a lot of discipline, poor rebellious child that it was.

What is the single worst distraction that kept you from writing this book?

The internet. Hands down.

Tell us about the place—as in the physical location: a messy office, a comfy couch, a certain corner table at the café—where you spent most of your time writing this book.

I wrote this book while in an old miner’s house with wooden floorboards and pressed ceilings and an infinite army of cockroaches. I no longer live there. This is possibly a good thing. Now I write on the world’s oldest, ugliest, and most uncomfortable couch with a view of a bottle brush tree and a slice of mountain.

There are moments when it felt more real—the cover was definitely a big “real” moment, as was ripping open the envelope with my ARCs. I think I’ll only truly believe the book exists when I see it in a bookstore.

If I could have a book signing with Clive Barker and Enid Blyton, that would be cool just for the entertainment value. It would have to be in a ramshackle Victorian house in Cape Town, filled with assorted sea-junk, and I would have people make their own pizza dough animals and bake and swap them. It goes without saying that there would be kegs of Austrian beer involved. Also, Clive better do a painting for me. (Hey, you said dream signing, right?)

How do you plan to celebrate your book’s birthday on February 28?

In a ramshackle Victorian house in Cape Town…ha, you thought I was kidding. I’ll be doing a joint art exhibition/book launch with the artist Jo Doe, who is working on paintings inspired by When the Sea is Rising Red, in a little Victorian Quaffery called A Touch of Madness. Although strictly speaking that’s going to happen two months after the official launch in the US, thanks to the wonders of sea travel.

On the actual day I’ll probably be freaking out on the internet and drinking crates of champagne.

Cat Hellisen lives by the sea with a bunch of people, some shorter and furrier than others. She does drink tea, but she doesn’t start revolutions or have access to magical drugs.

What is the next Winter/Spring 2012 debut novel I’m looking forward to? Come back tomorrow to find out.