This guest post is part of the Turning Points blog series here on distraction no. 99—in which I asked authors the question: What was your turning point as a writer? I’m honored and excited to host their stories. Read on as Sean Ferrell reveals how he stopped making excuses and came to write his debut novel. This post kicks me in the pants and gets me writing! Hope it does for you, too…

You haven’t written anything for a long time. So long you forget how to end a… You don’t have enough time. There are socks and underwear to be washed. There are dishes, oh the dishes you have. There is a spouse or someone demanding to be one or fighting to not be. There are children or the whispers and worries asking for them. There is there is there is. Mostly there’s the problem that The Writer hasn’t shown up. You’ve checked your email, peeked out the door, nosed about the windows, listened for the phone. No sign of him on Twitter. Facebook. All your days are made of things that cast shadows, things that stand between you and a figment that isn’t even an idea yet: the book, the story, the poem, the, the, the. You need The Writer to show up because he’ll have the time, the perfect place, the writing pen, the right pen, the right, the rite. You need The Writer to show up, wine whiskey coffee in hand, unlit cigarette—he quit smoking more than a decade ago but symbols are crutches as easily as crutches are symbols—behind an ear. You need his attitude, his slouch, his far-away-stare, you need his ease in his body, his roaming mind, you need need need most of all that one thing that you’ll never have even if you pasted all his other attributes to you like a homemade Halloween costume. You need The Writer to show up because he knows what to say.

Here’s a terrible secret: The Writer never shows up.

After graduate school I had an MFA and no idea what to write. I moved from Boston to Brooklyn, worked in publishing long enough to witness 9-to-5 work beat my desire to write nearly to death and leave it shaking in an alley between East Village bars. I thought, “When I have time to write ha ha ha I’ll get to work on it.” It. That’s what I called my writing. It. All I lacked was the “sh.” I envisioned a writer showing up who knew not only how to say something, but what to say. I was lost in a mush of conflicting ideas, images, and oddities I didn’t know how to handle. I was supposed to have something to say, right? That’s what writers do. They say things. They get the words out in the right order and they mean things. I couldn’t do that. I could only distract myself until he showed up. Thank God for Xbox, comic books, and cartoons.

Maybe the writer was lurking in a writing group. I joined one. I spent a good deal of time fretting about what to take to the group, what of my “it” they would respond well to. Swallowing criticism tasted like a mouthful of batteries. I already knew the stories I submitted were terrible. Did I need a group to remind me? The others in the group were writers. Two of them were published. What was I? I scrambled—between work and distractions and the serious business of trying to finish Halo—to gather words into piles big enough to trick the group into thinking I was actually like them, that I could write, that I had something to say. Mainly I did this by taking old pieces, things long critiqued into lexicons I no longer understood, work that no longer felt like mine. The pressure to please my readers had hobbled me.

One week I had nothing. The night before the group was to meet I went through a stack of work and had nothing that felt worth taking. I was paying to attend this group and so I wasn’t going to simply skip it, or go empty-handed. Even though I knew that if The Writer showed up he’d need a better place to write, and better material to work with, and a clear idea of what he was trying to say, I stayed up late and cobbled together something new. It felt a little like a last hurrah, flaming out in tremendous fashion, and maybe it was the exhaustion or the pressure to take a certain number of pages, but I didn’t censor myself as I usually did, I didn’t worry about the dearth of ideas, didn’t worry about the fact that what was tumbling out was, in a word, weird. I’d read weird before, and I knew many very talented writers worked in weird the way bakers do flour, but they were writers, they had a point. I was simply me, and my weird was leaving me with question marks all around. When I finally stopped I had fifteen pages of who-knew-what, but there was a certain storyishness to the words, not as much it-acity, and I resolved to not tinker or even read it before attending the group. I would simply hold my nose and swallow.

The Writer never arrived. I did. I stopped waiting for the moment when I would know what to say. I realized later that I’m not supposed to know what to say. I’m writing to find out what needs to be written. And not only in my fiction. This post, my tweets, marginalia, revision notes, who knows what any of them are supposed to do or be, but they get done, and not by some writer. It’s just me. Me, with the holes in my socks and the laundry in the washer and a pile of Legos between my feet. Do I still long for a Writer to show up and start chiseling some of the barnacles off for me to make the sailing a little smoother? Of course. But do I expect it?

That thing I cobbled together the night before my writing group was a turning point, an end to waiting for The Writer to show up, a beginning to taking care of the work myself. And a funny thing happened on the way to the funeral pyre. The piece got very positive and constructive feedback. The only negative response was a reader saying he didn’t see how I could have the narrator enter a lion’s cage so early in what felt like a longer work. “Don’t know how you’re going to get him out of there.” I didn’t know either, and that was okay. I didn’t know how he’d get out of the cage any more than I knew what it “meant” or what I was trying to say. All I knew was that this was the thing I needed to work on. This was “it.”

After some tussling and no-holds-barred editing, that piece became my first novel, Numb.

The Writer still hasn’t shown up. At this point, he doesn’t need to. 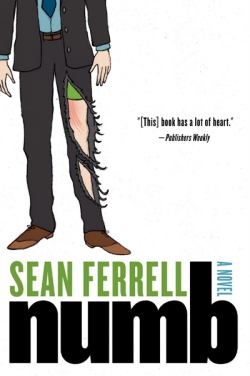 Sean Ferrell’s fiction has appeared in journals such as Electric Literature’s “The Outlet” and The Adirondack Review. His short story “Building an Elephant” won The Fulton Prize. His debut novel, Numb, was published by Harper Perennial in 2010. His second novel, The Man in the Empty Suit, will be published in 2012 by Soho Press.

He lives and works, in no particular order, in New York City.

EDITED JAN. 23… IT’S NOW TIME TO ANNOUNCE THE WINNER OF A SIGNED COPY OF NUMB!

All commenters on this post were entered to win a signed copy of Sean Ferrell’s debut novel Numb. And a winner has been randomly chosen…

Congrats, ElyssaJK! I will be emailing you soon for your mailing address. And thank you again, Sean, for donating the book for this giveaway!

And look for more open giveaways on the giveaways page so you can win some books!