Time for more in the Summer 2012 YA Debut Interview Series, featuring debut YA authors who’ve written books I am absolutely dying to read! I’ve chosen eleven (yes, 11 this time!) debuts to feature, and I hope by the end of this series you’ll be as excited about these books as I am.

Today’s Summer 2012 YA Debut is Grim by Anna Waggener. Read on to see how this author answered the Q&A… And be sure to enter to win a signed ARC of Grim! 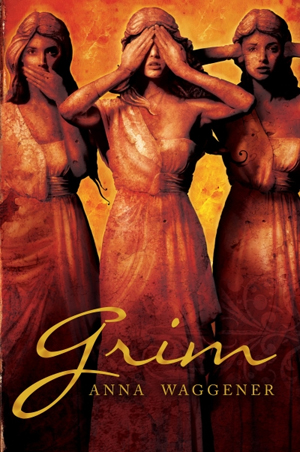 Nova Ren Suma: I’ll start with the dreaded question you may be hearing already from strangers on elevators, long-lost family members, and your doctor while you’re sitting on the examination table in the paper gown during your next checkup: “So what’s your book about?” (Feel free to use the jacket copy, or describe in your own words. Up to you.)

Anna Waggener: My go-to description: “A single mom gets in a car accident and wakes up in Limbo. All she wants is to return to her children, and all they want is to move on after her supposed death. It’s a book about love. Family love, selfish love, and all the gray areas in between.”

Scholastic’s jacket copy (they’re better at this than I am):

“When Erika wakes up after a horrific car crash, she finds herself somewhere between earth and heaven, between life and death. She doesn’t want to accept help from Jeremiah, who she’s not sure she can trust, even as she finds herself drawn to him, following him into a grim city of souls. She’s not sure who wants to help her and who wants to hurt her. And she’s desperate to get back to her children.

Shawn’s never thought about having to shoulder the responsibility of caring for his young sister Megan and his reckless older sister. And he never imagined that the three of them would find themselves in a haunted wood, sometimes chased, sometimes assisted, never sure where they’re headed.

With Grim, the terrifically talented Anna Waggener delves into the place where myth becomes reality, where family can distort you as easily as it cares for you, where death and eternity meet.”

My friends consistently tease me for the “terrifically talented” bit 😉

This was the last novel for NaNoWriMo that I ever penned—not because I didn’t enjoy the process, but because I got swallowed up by big-people life (i.e., college). I went into NaNo with a rough sketch of what Grim would become and it spilled out. So. Fast. I’m sure that time away has made it seem like a more painless process then it actually was, but I do remember staying up late at night and thinking about the book throughout my day; I loved these characters and it was a pleasure to be with them.

The editing process, on the other hand, was a grueling one. I performed an edit before submitting to Scholastic, and three more in a two-year span while they held onto the manuscript. By the time I received an offer from them in November 2010, I had spent a lot of time away from Grim, and had moved onto other projects.

But I was ecstatic that November! Being published was something I’d always dreamed about—something that I’d studied and researched and desperately wanted.

In the middle of my euphoria, I dusted off the manuscript that had changed my life. And I hated it.

I obsessed over it for months, reading and rereading the prose that I thought was too stilted, the characters whose motivations had seemed so clear but no longer were. I doubted myself and I doubted Scholastic for believing in me. I didn’t want to talk to people about this self-doubt for fear, ironically, of looking full of myself. I had a book offer from a huge publishing house! Why couldn’t I be happy for myself?

I went through a multi-month period when I would reread sections of Grim and feel sick to my stomach. I tried to edit and had a lot of trouble. At one point, I finally went to one of my creative writing professors and told him that I didn’t know what to do. He told me to start over.

From my conversation with that professor, I felt a lot better about being able to go back in and rip Grim apart if that’s what it took to make me happy with my own work. I calmed myself and reread the manuscript without letting myself dwell on how frightened I was, or on other people’s expectations. I scribbled on the pages. I also received a more intensive editorial letter from my editor, and realized how brilliant she was—and how she’d seen things in my work that I had forgotten about and overlooked during my period of Grim-bashing.

In the end, I didn’t start from scratch, but I gave myself permission to—and that was one of the best decisions I ever made. I wrestled with the text and with my own intensions and I fell in love with Grim again. In a different and more complicated way than I did when I first wrote it, but probably in a healthier way too.

I wrote Grim primarily in my bedroom in the house I grew up in, by a window that overlooked our backyard. I no longer live there and the house is currently being rented, so I can’t provide a photo—but this where I write now: 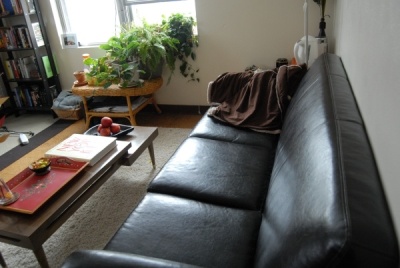 It’s the couch in my apartment living room, and it’s usually a lot messier than this. I’ve also been writing on the floor a lot, which my boyfriend critiques as bad for my back. But I go where the muse goes!

My fantasy spot is an office in the upper floor of an older house, whose walls have been converted into bookshelves. I’m a bit obsessed with bookshelves—they always make cameos in my novels.

Imagine you’re on the subway, or the bus, or sitting in a park somewhere minding your own business… and you look up and see the most perfect person you could picture devouring your book. This is your ideal reader. Set the scene and describe him or her (or them?) for us.

She’s in that flexible age between high school and college and she’s reading Grim in a coffee shop on a sunny weekend afternoon, before meeting friends. She’s clever and confident but also reflective, and she loves reading books, from the classics to contemporary YA. Maybe this is reflected in the stack of books she has sitting on the table beside her cup of tea, or maybe you can’t tell. Reading is a part of who she is, not just what she does, and I’d be thrilled to find that Grim isn’t merely a guilty pleasure for her—it’s a book that she’s happy to read with the dust jacket on, in public.

Publishing a novel is full of high points, low points, absolutely surreal points, and shocking points you never thought you’d see in your lifetime. Tell us a high point, a low point, a surreal point, and something shocking or at least somewhat surprising about your experience so far.

High point: Receiving my first in-depth editorial letter and mark-up from my editors. They were both so supportive, but also had some great constructive criticism, and I felt respected and valued in an incredible way.

Low point: I went into this in question two, so I won’t rehash except to say that self-doubt is an evil, debilitating creature.

Surreal point: Talking to Rosemary Stimola on the phone, after she’d read a draft of Grim. I tried to sound coherent even though my mind kept telling me that, in that moment, I was one degree of separation from Suzanne Collins.

Surprise!: Receiving my cover! I’d talked to my editor the week before and had been told that it would be blue and silver—only to receive an orange .jpg! It turns out she’d meant to say not blue and silver, but I’d caught her pre-caffeine.

I’d tour with Sarah Rees Brennan (who seems like a lovely, hilarious person) and Terry Pratchett (because I think he might be a god). We’d tour by train through Spain, France, and Germany, and hand out black tea and croissants with my mom’s homemade apricot jam.

I love my youngest child more than the other two, and God bless them but they all know it.

Grim will be published by Scholastic on June 1, 2012. Read on for a chance to win a signed ARC!

Anna Waggener was born in Thailand and has spent many summers eating ripe-to-bursting mangoes. At college in Minnesota she spends her winters buried under the snow, studying English and human rights, and happily writing YA fantasy. She was the 2008 winner of the Scholastic Art and Writing Awards novel writing category, and Grim is her first novel.

Visit her at annawaggener.com to find out more!

The giveaway is now closed. Congrats to the winner!

What is the next Summer 2012 debut novel I’m looking forward to? Come back tomorrow to find out.