Welcome back to my Fall 2012 YA Debut Interview series! I’m excited to feature these debut novels from the fall season, and I hope you’re as intrigued to get your hands on them as I am. Today’s YA debut author is Emily Hainsworth—her first novel, Through to You, comes out October 2 from Balzer + Bray / HarperCollins. Read on to see how Emily answered my Q&A…

…And be sure to enter the GIVEAWAY for a chance to win a signed ARC!

Emily: Camden Pike has been grief-stricken since his girlfriend, Viv, died. Viv was the last good thing in his life: helping him rebuild his identity after a career-ending football injury, picking up the pieces when his home life shattered, and healing his pain long after the meds wore off. And now, he’d give anything for one more glimpse of her. But when Cam makes a visit to the site of Viv’s deadly car accident, he sees some kind of apparition. And it isn’t Viv.

The apparition’s name is Nina, and she’s not a ghost. She’s a girl from a parallel world, and in this world, Viv is still alive. Cam can’t believe his wildest dreams have come true. All he can focus on is getting his girlfriend back, no matter the cost. But things are different in this other world: Viv and Cam have both made very different choices, things between them have changed in unexpected ways, and Viv isn’t the same girl he remembers. Nina is keeping some dangerous secrets, too, and the window between the worlds is shrinking every day. As Cam comes to terms with who this Viv has become and the part Nina played in his parallel story, he’s forced to choose—stay with Viv or let her go—before the window closes between them once and for all.

I haven’t figured out how to write out of order yet. I wish someone would tell me how because it seems so appealing to skip over a scene and come back to it rather than letting the words grind to a halt while I sob over one uncooperative sentence for hours. I knew how Through to You would begin and end right from the start, but (as most writers do) I struggled with the middle. There were nights I passed out under my laptop with only a couple hours to spare before I had to get up for work, but then I’d spend the whole next day making notes to myself, listening to my book playlist, itching to get back into the story. Mostly I remember being frustrated when I couldn’t work on it. All told, I managed to write and revise the entire book in about a year’s worth of evenings, weekends, and distracted moments.

So much of writing is in the brainstorming. While I actually typed most of Through to You sitting on an old black couch my husband and I bought as a newly married couple, I brainstormed most of the ideas for the book while at work in my mobile dog grooming van. I was a groomer for 12 years. It’s totally fun working with animals all day, but since they can’t talk, a great portion of my time was spent listening to my iPod and getting lost in my own thoughts. I would jot down ideas while bathing or blow-drying, then go home and try to write them down effectively at night. So while I desperately wished I had more time to stay home on our black couch to type those words, I have to give credit to every shih tzu, poodle, and labrador who waited patiently for me to finish brushing or clipping them inside my van while I scribbled the ideas that would become this book.

A few years ago I was going to a baseball game with my husband and his family. We had nosebleed seats, so we rode up an enormous escalator to the top of the ballpark. I noticed a teen girl in front of us carrying a YA book I’d recently read and loved (I think it was Catching Fire by Suzanne Collins, but don’t quote me on that). She had just started the book and was talking to her mom about how excited she was about it. At the time I didn’t have an agent, let alone a publisher, but I thought how cool it would be to see someone reading and talking about my book like that someday. This is what I envision when I think of my ideal reader.

In late February I was sitting at home working away on the draft of my second book when I heard a sound on my front porch. I wasn’t expecting any deliveries and my publisher hadn’t told me they were sending anything, but I thought to myself: Wouldn’t it be cool if that was the sound of ARCs hitting my front porch? And it was! The outside of the box had the title of my book and my name on it. The inside was full of beautiful, glossy ARCs with a title page and special font for chapter numbers and everything. This is when I geeked out and started running through the house screaming because I couldn’t find a knife to open the box, and then I couldn’t find my phone so I could tell EVERYONE about it. I was 24 weeks pregnant at the time and I felt a little guilty about subjecting the baby to all that commotion, but I like to think my daughter was there to celebrate the moment with me when no one else was. I’m expecting finished copies any day now and we might just relive the experience. 🙂

There are so many authors living AND dead I would love to do this with, but if I had to pick only two I would go with my critique partners, Courtney Summers and Tiffany Schmidt. I can’t imagine two people who understand me better and I know we’d have fun even if no one showed up to see us. We could tour the world (why not?), and I’d probably go the straight-up-sugar route of cupcakes and Skittles for food. Although, if I could get Courtney to cook for everyone I would because I’ve never met anyone else who could simply tweet a list of ingredients and make them sound so appetizing.

“Tomorrow is nothing after two months of never again.”

Through to You comes out October 2, 2012, from Balzer + Bray / HarperCollins. Read on for a chance to win a signed and personalized ARC! 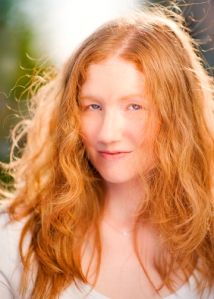 Emily Hainsworth was raised in upstate New York and currently resides in Denver with her husband and daughter. Through to You is her first novel.

Visit her at www.emilyhainsworth.com to find out more.

You could win: a signed and personalized ARC of Through to You!