What scares you? That’s the question I asked YA authors for this blog series. Stay tuned for interviews and guest posts as authors visit and reveal their frightening—even surprising—fears. 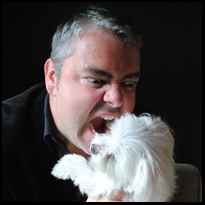 Today’s guest author is Daniel Marks, whose debut YA novel, Velveteen, just came out this month. (And be sure to enter the giveaway to win a signed finished copy of Velveteen!)

What scares Danny? Read his guest post to find out.

Imagine it’s summer—this shouldn’t be too hard, since we’re at the tail end of a particularly hot one (for some of you)—also, imagine you’re young, impressionable (this one might be a stretch), now, imagine you’re me—I know this is asking a lot, as most of you don’t need anti-anxiety medication or a human-size Thundershirt.

It’s 1977. You’re living in Portugal with your parents. Not the mainland, but the oh-so tropical island of Terçeira. You’re bored. You’re looking for trouble, like a miniature version of a Hell’s Angel or mafia enforcer. Behind your house there’s a stone wall; beyond that a vast plantation of banana trees. There may be a sign that reads: no trespassing (in Portuguese, of course)—I’m not saying there is, exactly, but yeah, it’s totally there.

You can’t resist, you go over the wall, like a prison escapee or a cockroach. And it’s worth every punishment you could ever receive. The banana trees are mammoth, bunches of fruit clinging precariously to their fronds. It could very well be a scene from a fantasy. There could be alien life here.

And then you find it, a fallen bunch, fat with fruit, and something else. Is it moving? Is that a leg? Brown and covered in short, coarse hair? No way. Couldn’t be.

You nudge the bunch with your foot. And it breaks apart.

(This would be a good place to brace yourself.)

The tarantula family—yes, you read that right—the one whose home you’ve desecrated, they’re NOT happy. They scatter, they advance, the sound is like crinkling paper, a hundred legs tamping down the dry palms carpeting the plantation floor.

Is that one on your foot? Um…yes. Definitely.

Now, if you’ve imagined hard and long enough and with a strength of conviction to join me on this trip, then, you should be screaming right about now. Running. Screaming. Windmill arms would not be out of the question. You’re certain there are at least ten clambering over your back searching for exposed flesh to sink their fangs.

You scramble back up the wall, scuttling for the safety of home. Once there, you realize that nowhere is safe. The spiders are everywhere. Under the beds. In the dark recesses.

This has been a reenactment. Just a reenactment. Could it happen to you? Certainly, it might have. And I do apologize if you’ve had to curl up in a fetal position due to phobic triggering, if you’re covered in sheets of flop sweat, shivering, demented. Please feel free to take your Zoloft.

But I think this answers Nova’s question.

What scares me most? Spiders. Obviously. If you haven’t picked that up, then, well, I’m not sure what to suggest—some sort of retention seminar?

I’m still scared of spiders. I’m traumatized when they show up in horror movies; it’s worse when they’re in my house, guaranteed. I can deal with just about anything else, and have. Snakes can coil around my ankles, rats can take a nap on my head. I don’t care.

Eight legs is four too many. It’s unnatural. Certainly there’s a size issue. I’m not going to freak out over a tiny one, but up the figure to twenty baby blood-suckers and yeah, I’m making reservations at the state mental hospital. Tarantulas were probably a pretty harsh indoctrination to a phobia, granted. And since then, I’ve studied psychology, extensively—which is probably best, since I was a psychotherapist for twelve long years. But the education had an undesirable effect. I learned about phobia treatments and in particular one called flooding.

Now, flooding doesn’t involve water—unless you’re phobic about water. Flooding means that you introduce a lot of whatever the client is scared of in an attempt to burn out the irrational fear. SPIDERS. Just knowing this technique is available, has kept me from bringing up this phobia in any professional setting.

Pardon me, I’m off to fumigate.

Thank you so much for sharing your fears with us, Danny! I’m still shuddering, ack. Readers: Be sure to enter for a chance to win Velveteen (scroll down for giveaway details).

Daniel Marks writes young adult horror and fantasy, spends way too much time glued to the internet, and collects books obsessively (occasionally reading them). He’s been a psychotherapist for children and adolescents, a group home counselor for the chronically mentally ill (none of that rubbed off…at. all.), and a Halloween store manager. He’s survived earthquakes, volcanoes, and typhoons to get where he is today, which is to say, in his messy office surrounded by half empty coffee cups. He lives in the Pacific Northwest with his wife, Caroline, and three furry monsters with no regard for quality carpeting. No, seriously. None.

Velveteen is his debut YA fantasy (Delacorte/Random House Kids) and goes a little somethin’ like: In the midst of a purgatory-shattering uprising, a soul-retriever must juggle her responsibilities to her team, her self, and the future victims of the psycho that killed her—not to mention a newly deceased (and very hot) boy’s unhealthy fixation (because who has time for healthy ones?).

Visit him online at velvetandnyx.blogspot.com.

Want a chance to win a signed finished copy of Danny’s debut novel, Velveteen, which just came out this month?

This giveaway is now closed. Thank you to everyone who entered! The winner will be announced soon.

Here’s what you missed so far in the What Scares You? series:

And come back tomorrow for more… The next author to share fears with us is: Gretchen McNeil, author of Possess and Ten!