What scares you? That’s the question I asked YA authors for this blog series. Stay tuned for interviews and guest posts as authors visit and reveal their frightening—even surprising—fears.

Today’s guest author is Fiona Paul, author of Venom. (And be sure to enter the giveaway to win a signed finished copy of Venom!)

What scares Fiona? Read on to find out.

Do you remember that movie from about ten years ago where the entire thing was just two people bobbing alone in the ocean after their scuba tour boat mistakenly abandoned them? I watched it with my family. My mom was bored out of her mind. My brother said: “What is the point of this again?” I don’t even remember if I answered him. All I remember is watching the whole movie scrunched up into a ball with my heart pounding against my ribcage, positive that I would be abandoned in the middle of the ocean and left for shark bait the next time I went out on a tour boat.

Yes, it’s true. I suffer from selachophobia—the fear of sharks.

I probably don’t need to ramble on about exactly why I’m afraid of sharks. The dead eyes, the crazy teeth, the way they sometimes chomp people in half when they’re not even really trying. I mean, who isn’t totally freaked out by sharks, aside from the occasional delusional marine researcher who thinks he can wade right into a big tangle of lemon sharks and not get bitten? (Spoiler: he got bitten, but he’s fine.) However, it’s kind of a weird phobia for a landlubber like me to have—I live almost 700 miles away from the nearest ocean.

I think it all started during another family movie night. I was about five. I remember sitting cross-legged on the floor of the family room with my brother while my parents and sister sat on the sofas. We had that pleather furniture that you stick to if you sit on it for more than five seconds, so I preferred the floor whenever possible. It seems like I was coloring or something as my parents flipped through the channels deciding what to watch. They agreed on Jaws. I don’t think they meant to scar me for life or anything. Chances are they thought I wouldn’t really pay attention, but it’s kind of hard to tune out endless screaming and all that blood in the water.

And ever since then, I can’t go knee deep into the ocean without being on shark patrol. Don’t get me wrong. I do go in the water. I love the wind blowing off the waves, the feel of being tugged back and forth by the surf. I would never give that up. But at the same time, I can’t relax and enjoy myself because I am always on the lookout for sharks. (Okay, once I relaxed. I was in Jamaica, neck deep and scanning the clear turquoise water for dark shadows or dorsal fins when a man informed me there were “no sharks in Jamaica, mon.” I’m not sure why I believed him, since it seemed he was just at the beach trying to sell weed to college kids and never got in the water himself, but I did. For an entire half day I let down my guard, and it was great. I was “at one” with the sea.

You might think a fear of sharks would mean that I stay far away from aquariums, shark movies, Discovery Channel, etc. Actually, not so much. One thing I realized working in oncology is that most people are either ignorance is bliss people or knowledge is power people. I am the second kind.

Because of that, I have spent hours poring over the International Shark Attack File and other shark websites. I have watched tons of shark television and bought books about shark behavior. Do you know where most shark attacks in the US take place? The Florida panhandle. Do you know the most dangerous time of day to swim? Sunset. Do you know why surfers are attacked more than swimmers or divers? Because they look like turtles. Do you know where to hit a shark if it bites you? The snout, eyes, or gills. Do you know what the most dangerous color of swimwear is? Sharply contrasting colors or suits with shiny pieces. (Yeah, your black-and-white rhinestone-studded bikini? That’s for the sand only, okay?)

And here’s the funny thing: The more I learned about sharks and how not to get chomped by them, the more I started to fall in love. Yeah, sharks are scary as all get-out, but they are also kind of majestic and beautiful.

Click here to see how beautiful sharks can be.

Don’t get me wrong. I’m still super-duper afraid of them and will probably never learn to surf (even though I think it would be epically awesome). But I also feel respect and admiration toward them. Kinship, even. Do you know how many people sharks kill yearly? Somewhere between 5 and 25. Do you know how many sharks people kill yearly? Over a hundred million. And we don’t just kill them, we cut off their fins and throw them back in the ocean where they slowly bleed to death. And for what? Soup? That doesn’t seem right. Check out the amazing documentary Sharkwater if you want to know more. I cried watching this film—it is that good.

No sharks in the Mississippi River, mon.

And the next time something totally scares the crap out of you, think about embracing it. You just might fall in love.

Thank you for sharing your fears and how you’ve moved past them, Fiona! Readers: Be sure to enter for a chance to win Venom—(just scroll down for giveaway details). 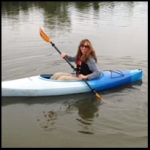 Fiona Paul lives in St. Louis, MO, where she’s managed to persuade fancy universities to award her degrees in psychology and nursing. Between her studies, she traveled around five continents and spent time living in Thailand and South Korea (which is probably why she finds the idea of wearing shoes in the house a little weird).

In addition to writing, Fiona is somewhat obsessive about coffee, music, and adventure sports. Her future goals include swimming with great white sharks and writing a whole slew of novels, not necessarily in that order.

And check out the book trailer for Venom:

Want an INTERNATIONAL chance to win a signed copy of Venom? 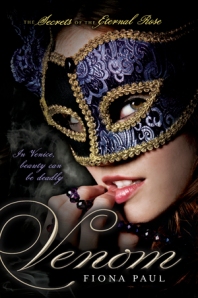 This giveaway is now closed. Thank you to everyone who entered! The winner will be announced soon.

Here’s what you missed so far in the What Scares You? series:

And come back tomorrow for more… The next author to share fears with us is: Sarah Rees Brennan, author of Unspoken, the Demon’s Lexicon trilogy, and more!