Welcome to a new series here on distraction no. 99 called Beyond the (Latest) Buzz. I’ve asked YA and kidlit librarians and book bloggers to share some books that they think deserve more attention. And I asked them specifically because I thought that, of all readers in the know, librarians and book bloggers are some of the most passionate readers we have in this industry, they read a TON more books than I do, and maybe, if I asked nicely, they’d be eager to recommend some beloved books with us here? They were—and they did.

Read on to see what books youth-services librarian Liz Burns of A Chair, A Fireplace & A Tea Cozy wants to share with us today…

When Nova Ren Suma asked me to be part of this series I was all YES. OF COURSE. Picking what books to talk about? Very, very difficult. I decided to pick three; and cheated, by including two series amongst the three. 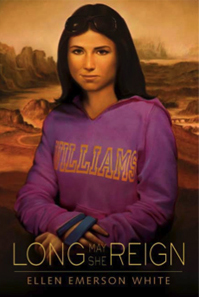 My first recommendation: Ellen Emerson White, a fabulous, talented writer, whose books make you think you are there, hanging out with her characters, sharing a TAB and watching TV. And yes, some are out of print and may be hard to track down, but it’s worth it.

The President’s Daughter introduces Meg Powers, daughter of the first serious female presidential candidate. (Originally published in the late 1980s, these titles were reissued [with some updates to make the references to things like TAB less dated] by Feiwel & Friends in 2008.) Spoiler: Meg’s mom is elected president, and the series takes Meg from high school to college with some unique challenges along the way.

White looks at issues of politics and power, the sacrifices people make for each other, how family is there for you yet can let you down, and does so via one of my favorite teens in literature. Meg has a wicked sense of humor, and her voice will stay you with you well after you’ve finished these books. The other titles are White House Autumn, Long Live the Queen, and Long May She Reign. Fun Fact: the final book came out almost 20 years after the first book. 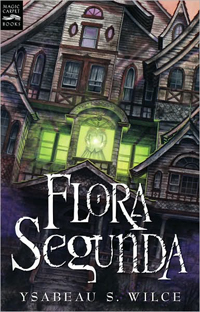 Next: a book I adored, yet, somehow, I never reviewed. All I can say is in 2007, I was less disciplined in my writing and reviewing, which is why I never reviewed Flora Segunda: Being the Magickal Mishaps of a Girl of Spirit, Her Glass-Gazing Sidekick, Two Ominous Butlers (One Blue), a House with Eleven Thousand Rooms, and a Red Dog by Ysabeau S. Wilce, (Harcourt, 2007). Flora is almost fourteen, the daughter of a famous General and a mad father. (See what I did there? You didn’t think “mother” when I said “General,” did you?)

Flora is a fabulous character: smart, quick, brave, stubborn, everything one would want in a heroine. Her world is fantabulous with fantastical elements but it’s also grounded in reality, that is, real consequences. Her family is a military one and it’s been scarred by war: her father suffers mentally and physically from being captured and tortured, and there was another daughter named Flora lost in that war who Flora is named after.

Flora wants to chart her own course, be a ranger like the famous Nini Mo who is full of such advice as “You can see more standing on a ladder than crouching in a ditch.” Her world is an alternate version of our own, set in a vaguely familiar California called Califa. Califa is just as smart and amazing as Flora, a fully realized world that I want to visit. Bonus points that it’s a place where women are generals and no one thinks twice about it. Finally, there is humor, as you can tell from the title of the book. You’re lucky if you’re just discovering this trilogy, because it’s now complete: Flora’s Dare: How a Girl of Spirit Gambles All to Expand Her Vocabulary, Confront a Bouncing Boy Terror, and Try to Save Califa from a Shaky Doom (Despite Being Confined to Her Room) was published in 2008 and Flora’s Fury: How a Girl of Spirit and a Red Dog Confound Their Friends, Astound Their Enemies, and Learn the Importance of Packing Light was published this year.

One final word about Flora: much as I love this series, I think the covers say “middle grade” when this is really a teen book. Oh, not saying younger readers wouldn’t like it, but it has appeal for older readers that the covers haven’t always reflected. 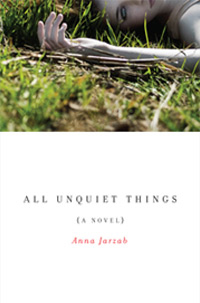 Time for something more recent; one of my favorite books of the past couple of years. Anna Jarzab’s All Unquiet Things (Random House, 2010). Neily’s ex-girlfriend was murdered a year ago, someone convicted and imprisoned, but his cousin Audrey believes the murder is still out there. Both Neily and Audrey tell the story, with plenty of flashbacks to the relationships between the three teens.

All Unquiet Things is a mystery, yes: who killed Carly? But it’s also about friendships and families; it’s about how personalities and relationships develop and change over four years of high school, and what that means to people. The writing is beautiful; and the characters are so real, they are almost uncomfortable to be around. Not because they are unlikeable; no, rather, because when they do unlikeable things, they are familiar things that people do.

Liz Burns: “My blog is A Chair, A Fireplace & A Tea Cozy at School Library Journal. I mainly talk about young adult books and reading, but I also include other things that interest me. During the day, I’m a youth services librarian for a network library of the National Library Service for the Blind & Physically Handicapped.”

8 thoughts on “Beyond the Buzz: Guest Post by Liz Burns”