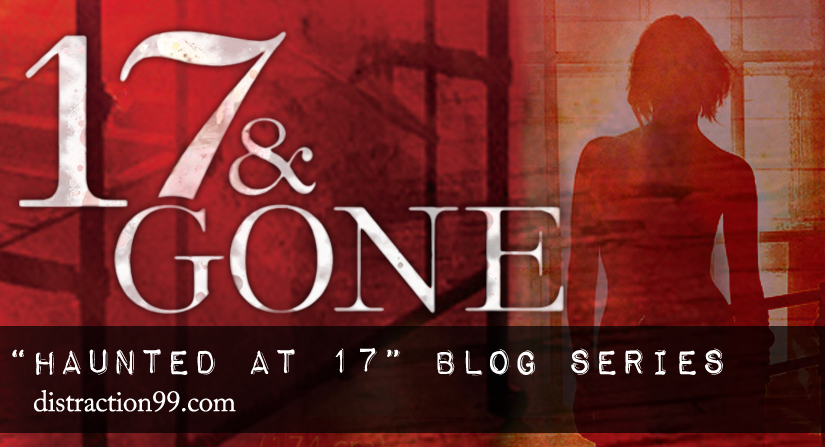 I’m unabashedly excited to tell you that my new novel, 17 & Gone, is out in stores TODAY RIGHT NOW IT’S REALLY HAPPENED*, and to celebrate its release you may have noticed that this blog has been taken over by memories. Some very honest memories from some of my fellow YA authors, revealing what haunted them when they were 17, just as my 17-year-old narrator in the book is haunted herself by missing girls who push her to uncover their stories. It’s only fair, since I’ve asked so much of everyone else, if I tell you what haunted me when I was 17.

I happen to know, because I went digging around in my closet over the weekend and found this:

That is a folder containing my typewritten poems and short stories, many of which were written when I was 17 years old. And there’s something you should know about me: Before my published novels, before I had an editor to contain me and my own experience as a writer to pre-edit myself, pretty much everything I wrote, no matter if I called it fiction, was purely, unapologetically, and undeniably though I did try to deny it, one single thing:

I sensed it coming for me. And if it didn’t hit me, maybe it would veer off and take someone else, but it was coming. I felt it. It’s infused in every line I wrote back then, the threat that had something to do with the body I was made to live in. The girl I was, and what men in the world did to girls. All I knew was that no boy—no male I’d ever known—could be trusted.

Is that honest enough for you? That’s the raw truth of who I was at 17, and speaks to what haunted me.

Other things I knew: That no one understood.

That out there, somewhere, would be understanding and an adult life I’d make for myself.

Sometimes I fantasizing about vanishing.

I knew these two girls who were planning to run. The two of them in a used car, whatever cash they could scrape together, and all the clothes they could fit in the trunk and on the backseat. They’d head to New Orleans, maybe. They’d head south, stop somewhere once it turned warm. They were 17, as I was, and they’d had enough of this shit. They didn’t even think it was worth staying to finish high school.

I heard them talk of their big, romantic plans for running away, and I wondered if I’d ever see them again.

I pictured it in my mind: the car on a highway at night, the windows down, the music up, the parents back at home pasting Missing flyers to telephone poles, and the two runaways down in New Orleans hanging curtains in their new apartment and studying for the GED. I went home, to our latest rental where my stepfather raged, locked myself in my room, and fantasized about saving enough money to break my mom and siblings out of there and be able to talk and laugh in the dining room, to open our doors, to live like other families lived. Simple things that sound silly to type now. I’d forgotten.

But I also imagined running.

Imagined leaving and never looking back. I only went so far as to imagine.

I was a coward, see. I was chicken. This is what I told myself.

I would never actually consider running away.

I couldn’t abandon my mother. I couldn’t leave my baby sister, who I adored like she was my own. I couldn’t even keep a secret from my mom, let alone worry her by staying out without telling her where I was for a single right. And how would I get out of town, anyway? It’s not like I had my own used car to stuff full of my belongings and point south. All the money I made at my job at the day-care center went toward saving for college, because that to me would be my escape. Besides, knowing I couldn’t afford a car, I’d never bothered to learn to drive.

And what was out there, in the world beyond the Hudson Valley? What would happen to a 17-year-old girl who just went running?

If people couldn’t be trusted here, imagine what it was like out there. Imagine.

As I remember, the two girls I knew stuck around. Maybe they ran away for a whole weekend, maybe longer, but it wasn’t for forever, let alone long enough to be alarming. Because the next time I saw them, they were there as always. They were home. Safe. I don’t even know if they made it to New Orleans for sightseeing.

But the idea stuck with me. A girl who just goes, disappears. It’s something I’ve been writing about for twenty years.

I think it was the only way I thought I could control anything.

What haunted me at 17 is all there, in 17 & Gone. I mean, you can see it even in the title, can’t you? Every piece of me from back then is in that book. I wanted to run, but I never did. I wanted to be strong, but I wasn’t. I wanted to fight for myself and for the girls I saw falling around me, but I didn’t know how to speak up.

At the same time I was digging around in my closet this weekend discovering that old folder of poems tied with ribbons, I was also watching and reading the news. The Steubenville verdict and the media feeling sorry for rapists’ futures without thought for the girl, and the disgusting victim-blaming comments about how the girl shouldn’t have been drinking, as if she’d wanted it, as if even if she hadn’t it was her fault… all this, it sent me spiraling back to 17.

It’s all there in what I wrote: What men yelled out car windows. What men said I wasn’t smart enough, or talented enough, or worthy enough to do. What boys lied about in the dark. What boys acted like under light of day. What guys wanted me to do when they had me alone. What people thought I did even when I didn’t. And pieces too. Like the night I got so fall-down, blackout drunk at a friend’s house that I can’t even tell you now all of what happened except in uncomfortable flashes. And that I had a boyfriend the next morning, and it took me six months to break up with him.

17-year-old me saw threats everywhere, and they all centered in on who and what I was: a girl. A girl in a world that wasn’t always kind to girls.

What’s all the more frightening now is looking back and seeing how close I came to so many bad things. I was standing with my toes over the edge of the cliff—just my toes dangling—and any little rush of a breeze could have knocked me over into the gorge. (The cliff metaphor is less a metaphor and more a connection to the physical landscape where I lived when I was 17, in Woodstock, in the Catskill Mountains you’ll find in 17 & Gone and in my previous book Imaginary Girls, there where we spent nights at actual cliffs and where I have stood, quite literally, with my toes on the edge and a push away from falling.)

I’ve written about this before—my urgent need to escape. But I didn’t remember my fears until now, until I saw those typewritten pages spelling it all out.

The girl I was at 17 was obsessed with the vivid fears that run through 17 & Gone. It’s as if I wrote the book for her, decades too late.

Or maybe it’s not too late. Maybe all my fears from back then needed to be channeled into something for right now, today.

Still, I wish I could tell her: She wasn’t a coward. She wasn’t chicken. She was right not to trust them—and one day, sooner than she’d guess, she’d find someone she could trust, in her real life, that did begin once she left that town.

And to assure her, somehow, if I could have, that she’d make it out when the time was right. I—and this book I wrote—are living proof she did.

There. That was as deep as I could go with my haunting without revealing too much and scaring you away. Now that I confessed what haunted me at 17, I hope you’ll look out for the book, on sale today! And keep an eye on this blog, too—there are more “Haunted at 17” posts coming from my  fellow YA authors in the next couple of days to help me celebrate release week!

* Also, please pardon my all-caps excitement at the head of this post. It’s never easy, this writing-an-idea-into-a-book-that-makes-it-to-being-published thing, and I don’t think I ever believe it will actually come to fruition until the day arrives and the book is out and no one can grab it back from me and tell me I was only dreaming.

(If I’m dreaming, please don’t pinch me yet because I’d like it to last all day.)

Don’t miss the other posts in the series. Throughout the week, more YA authors will reveal what haunted them at 17. Here are the Haunted at 17 posts so far…

Feel inspired and want to share what haunted you at 17? If you write a post on your blog, leave a link or tweet it to me. I’ll send you some 17 & Gone swag if you’d like it, and I’ll be featuring all the posts in a round-up on Monday!

You don’t have to be a writer to take part in this. All you have to be is someone who was once 17.

What haunted Robin Wasserman at 17?