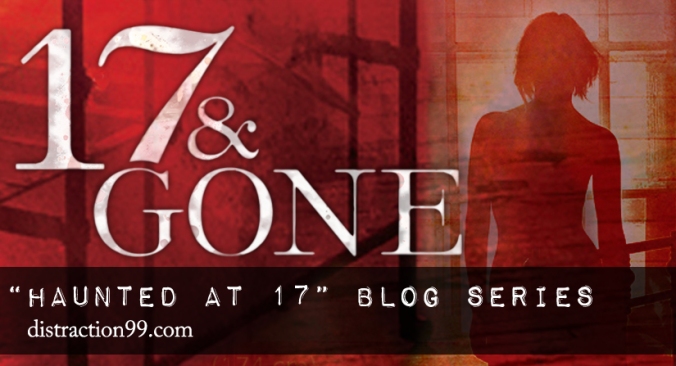 Thank you so much for reading the Haunted at 17 blog series to celebrate the publication of my new novel, 17 & Gone! To mark the release of this story about a 17-year-old girl haunted by the missing, I asked some authors I know to join me in answering this question: What haunted YOU at 17? They answered, and now it’s your turn.

Today I have the last featured Haunted at 17 story sent my way. It’s by Melissa Montovani. Read on to see what haunted her when she was 17 years old… and thank you again for reading all the stories.

Saying that few things haunted me at 17 wouldn’t be completely accurate. The truth is closer to the exact opposite. While I had a small group of great friends, I still felt like I didn’t fit in, that my small town was just too small. One look at the baggy, figure hiding clothes that I wore, including the never-wear-shorts-or-skirts rule, and I remember how uncomfortable I was with my body. Yet all of these hauntings were merely floating on the surface of who I was back then. They didn’t define me. Or, if they defined me at all, it was only in part.

Because by the time I turned 17, death had been haunting me for years. I was convinced that I wouldn’t make it into my 20s or 30s because I’d found a lump at the back of my neck. Cancer was the bogeyman in my closet as a child because most of my grandparents died of some type of it. Entangled up in my worry about the lump was my equally weighty fear that when I did die, I wasn’t someone that people would remember. I figured that if pressed to do so, then some of my peers would say that I was a very quiet, shy, and possibly, stuck up girl with a great smile (maybe they’d mistake a painfully shy girl with snobbishness), but they certainly didn’t know the real me. And as much as I wanted them to, I didn’t know how to share the person I was with them.

However, it wasn’t just my own death and its threat to the shy girl I was that haunted me. A few years earlier, one of my favorite aunts died suddenly and left me with a lot of questions that still haven’t been completely resolved. Unlike everyone else in my life who’d died up till then, she hadn’t been ill, and at 31, she was younger than I am today. All that I really knew was that my aunt, who let me drive her car at 14, who introduced me to some of my favorite bands, and who stood up for me time and time again, had killed herself. None of “the reasons why” explained why I’d never see her again and the words about a knife didn’t explain how it occurred. I may have been a few weeks shy of 15 when she died, but at 17, the horrifying things I imagined happening with that knife still haunted me.

While a lot of time has passed, some of these ghosts haven’t gone away. I learned long ago that the lump wasn’t anything serious. I’m still shy, but nothing like I once was. I haven’t lived in that too small town for a long time, and over the years, I’ve developed more close friendships and come to love my body. But, sometimes, when I least expect it, the ghost that’s haunted me the longest—my aunt’s death—feels like a dull ache.

Melissa Montovani is the founder of YABookShelf.com, a young adult fiction book blog, where she has been writing content about YA authors and books since 2010. She writes freelance reviews for Canadian Children’s Book News and is the Toronto Young Adult Fiction Examiner for Examiner.com. She has an M.A. in English Literature and lives and works in Toronto, Canada.

Don’t miss all the posts in the Haunted at 17 series, in which YA authors revealed what haunted them at 17… (Thank you to these generous authors for taking the time to write these stories and be a part of this!)

Thank you again for reading all the Haunted at 17 stories, here and elsewhere! I’ll be putting up a post featuring all the links that have been sent to me—and I’ll be contacting everyone who wrote a post to see if you’d like some 17 & Gone swag in thanks!