Today I have an interview with one of the April 2013 Anticipated YA Debut Authors! Today’s featured author is Cat Winters—and her first novel, In the Shadow of Blackbirds, comes out today, April 2, from Amulet Books! Read on to see how Cat answered my Q&A…

…And scroll down to see the THREE WINNERS of the swag pack!

Nova: I’ll start with the dreaded question you may be hearing already from strangers on elevators, long-lost family members, and your doctor while you’re sitting on the examination table in the paper gown during your next checkup: “So what’s your book about?” Surely you don’t carry around a copy so you can recite the description off the flaps, so how do you answer this question when asked?

Cat: In the Shadow of Blackbirds is the story of a sixteen-year-old girl named Mary Shelley Black who’s forced to deal with WWI-era America, the deadly 1918 Spanish flu pandemic, and the early-1900s trend of turning to séances and spirit photography to cope with grief. She’s a highly educated, scientific, rational young woman whose world is turned completely upside down when she starts to see the ghost of her first love, Stephen Embers, who was killed in battle overseas.

My protagonist was named after the author of Frankenstein, but she’s not related to her.

NRS: In my experience, novels transform themselves, sometimes unrecognizably, during the course of being written. Were there any shocking transformations that occurred between rough draft and final bound book?

CW: I originally created a major subplot involving a German family who befriended Mary Shelley while they were facing the anti-German prejudice that was occurring in WWI-era America. There was even a romantic interest: the family’s oldest son. Along the way, I was told those characters were distracting too much from the main plot of Mary Shelley’s connection to the unsettled ghost of her first love. The German family is now gone, but I kept references to the time period’s anti-German behavior.

NRS: So you’re here with me gossiping about your main characters behind their backs. What’s something they wouldn’t want anyone to know that might make them blush?

CW: There’s a rather intimate scene in Chapter 22 that Mary Shelley and Stephen wouldn’t want me talking about, and I’m sure it would make them blush. They don’t ever seem embarrassed or apologetic about their nerdy sides or their intellectual hobbies (the word “nerd” wasn’t around in 1918, but it fits them). Yet these two long-time childhood friends are sensitive when people discuss the blossoming physical nature of their relationship—which manages to continue, even when one of them is a ghost.

NRS: Tell us about the place—as in the physical location: a messy office, a comfy couch, a certain corner table at the café—where you spent most of your time writing this book. Now imagine the writing spot of your fantasies where you wish you’d been able to write this book… tell us all about it.

CW: My writing place is typically my home office. Thankfully, we have an extra room that I can use as a getaway from the rest of the house. For a change of scenery, I love writing in my local indie coffeehouse. 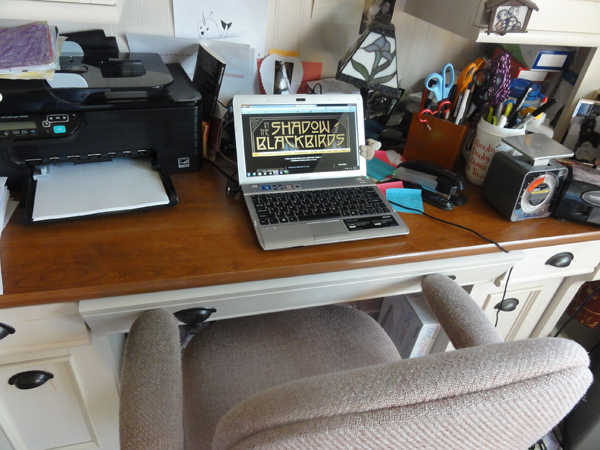 My fantasy writing spot would be a grand, library-style room with enormous windows overlooking a lush English garden. The novel doesn’t take place in England, but it would be wonderful to write while overlooking the grounds of a place like Downton Abbey.

NRS: To go along with the theme of this blog (and my life), what is the single worst distraction that kept you from writing this book?

CW: Ah, that would be the lure of the internet. I often sought out writing spots that didn’t offer free wi-fi so I would be forced to stay off the web and focus on my manuscript.

NRS: Imagine you’re on the subway, or bus, or sitting in a park somewhere minding your own business… and you look up and see the most perfect person you could imagine devouring your book. This is your ideal reader. Set the scene and describe this person to us.

CW: Hmm…that’s a hard one. I hope the book appeals to a wide variety of readers, but I suppose I would feel the greatest sense of satisfaction if I looked up from my park bench and saw a reader who looked a little out of place, a little weary, as if he or she didn’t quite fit in with the world at the moment. In the Shadow of Blackbirds is all about learning how to survive the darkest times in a person’s life while remaining true to who you are deep inside.

NRS: If you could go back in time to whisper a few words of advice into your own ear before you leaped into this writing career, what would you tell your young, impressionable self?

CW: “It’s going to take a ridiculously long time before you ever sign a contract with a publisher. I won’t even tell you how long you’re going to have to wait or how many manuscripts you’ll need to write, because it might break your spirit and determination. But it will happen. Keep going. Ignore the voices of doubt inside your head.”

NRS: Dream question: If you could go on book tour anywhere in the world, with any two authors (living or dead), and serve any item of food at your book signing… where would you go, who with, and what delicious treat would you serve your fans?

CW: Daphne du Maurier, Harper Lee, and I would travel the U.S. with a bird-themed book tour celebrating Lee’s To Kill a Mockingbird, du Maurier’s classic short story “The Birds,” and my own In the Shadow of Blackbirds. We’ll serve cupcakes decorated with artsy little bird toppers (which I’m actually doing at my real book launch), and we’ll welcome visitors with bird-themed music like “Mockingbird” and The Beatles’ “Blackbird.” du Maurier and Lee will then talk for hours about their writing, while I sit there, dreamy eyed.

NRS: How do you plan to celebrate your book’s birthday today?

CW: I’ll probably stay home to take care of tweets and emails (and work a little on my next book), but I plan to head out to a couple bookstores to look for In the Shadow of Blackbirds in the wild and perhaps enjoy a nice lunch. The real celebrating will begin during the following days, when my mom and sister fly in from out of state to attend my April 6 book launch party at Powell’s Books in Beaverton, OR.

In the Shadow of Blackbirds is on sale today, April 2, from Amulet Books. Read on for a chance to win a signed prize pack! (Three winners will be chosen!)

Cat Winters was born and raised in Southern California, near Disneyland, which may explain her love of haunted mansions, bygone eras, and fantasylands. She received degrees in drama and English from the University of California, Irvine, and formerly worked in publishing.

Her debut novel, In the Shadow of Blackbirds—a YA ghost tale set during the World War I era—is now available from Amulet Books/ABRAMS. She currently lives outside of Portland, Oregon.

Visit her at www.catwinters.com to find out more.

*THREE* winners were chosen to win signed swag packs for In the Shadow of Blackbirds! Here’s what they won:

Congrats to all the winners and thank you to everyone who entered!

13 thoughts on “Anticipated YA Debut Interview: IN THE SHADOW OF BLACKBIRDS (+Giveaway)”