This guest post is part of the Turning Points blog series here on distraction no. 99—in which I asked authors the question: What was your turning point as a writer? Here is Cat Winters, debut author of In the Shadow of Blackbirds and one of my Anticipated Debuts for April 2013, sharing her turning point…

And be sure to enter the giveaway before it closes tomorrow!

“You have to write the book that wants to be written. And if the book will be too difficult for grown-ups, then you write it for children.”
―Madeleine L’Engle

Thanks to several encouraging adults, I grew up believing my writing was something special. My elementary school teachers passed my stories around to other teachers and spotlighted my poems on the walls during classroom open houses. When I was eight, I was asked to write poetry for the memorial service of a four-year-old girl who had died of leukemia. When I was thirteen, I won a trophy at a youth expo after submitting a short story inspired by old TWILIGHT ZONE episodes. By the time I was in high school, I was writing full-length novels.

John Steinbeck once said, “I nearly always write, just as I nearly always breathe,” and that’s exactly how I felt growing up. Writing wasn’t even my first choice for a profession; I wanted to be an actress. Creating stories was simply a part of who I was.

After graduating from college, I lost some of my desire to act and panicked about what to do for a day job. I tried teaching high school English but discovered I was terrible at teaching—unprepared and overwhelmed. I then worked at a publishing company in downtown San Diego.

One morning, while I was sitting in my little gray cubicle, having just seen the Tim Burton movie Ed Wood (in which a real-life screenwriter creates his own movies, despite his astounding lack of talent), it hit me: I wanted to be a writer. I truly, with all my heart and soul, wanted to embrace my lifelong love of storytelling and pursue a professional writing career. I started writing a historical novel for adult readers and luxuriated in every minute I spent inside my fictional world.

That wasn’t my big turning point moment. It was a turning point, but deciding to be a writer when you’ve been writing all your life isn’t really all that momentous.

Even though I had started off as a child writing prodigy, I couldn’t sell my work. When I was twenty-seven, I signed with my first agent, but even then, my manuscripts never found publishing homes. My books didn’t fit into clear-cut categories like “romance,” and mainstream historical fiction was considered a dead genre. Editors fell in love with my work, but not marketing departments. I switched to contemporary fiction, I signed with a second agent, but still my writing crossed too many genre barriers and was considered unmarketable and risky.

My dreams crashed down around me, and my childhood writing achievements felt like a big tease. I almost felt bitter toward anyone who had told me I should be a writer and wondered why I had been sent down that particular path in life when it was leading me nowhere. The overnight success stories of other writers fueled my feelings of uselessness and failure.

Yet I kept on writing.

When I was thirty-eight, my agent and I had a conversation about one of my older manuscripts, another historical novel I had written for adult readers. We discussed switching gears and aiming for a young-adult audience, an idea I absolutely loved. Some of my favorite stories involving the world’s darkest moments are told by younger narrators, and I enjoy the honesty and rawness found in youthful voices. A brand-new story emerged out of the setting of that older manuscript, characters made themselves known, and In the Shadow of Blackbirds was born.

I wrote this novel for the book-loving teenager still inside me. I poured all my book-rejection frustrations into the pages and told a story through the eyes of a girl with a great deal of fight in her, for I wanted her voice to fight for me and this novel. The book jumped all over the place in terms of genre: horror, mystery, love story, ghost tale, thriller, apocalyptic fiction. I worried my work would once again be labeled “unmarketable” and “too risky,” but I wrote with courage, confidence, and passion, as if I were revealing a story that HAD to be told.

The book sold! The amazing and wonderful publisher Amulet Books offered to buy In the Shadow of Blackbirds one month after my fortieth birthday—thirty-three years after my second-grade teacher started passing my stories around to other teachers.

This failed child prodigy found success after switching to writing for children. If I had known when I was younger that I would have the most luck when I explored the farthest reaches of my imagination and paid tribute to the joys and pain of youth, perhaps I would have turned to YA sooner and endured a shorter publishing journey.

Or perhaps time just needed to pass, experiences needed to be lived, so that In the Shadow of Blackbirds could become my debut novel. I’m awfully proud of this book, so I can live with the theory that I simply needed to wait my turn.

Cat’s debut novel, In the Shadow of Blackbirds, came out last week from Amulet Books! 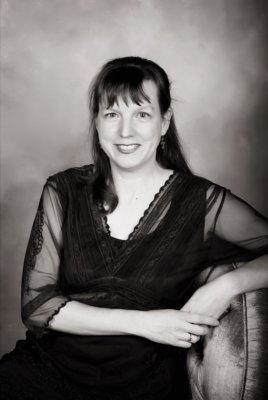 Cat Winters was born and raised in Southern California, near Disneyland, which may explain her love of haunted mansions, bygone eras, and fantasylands. She received degrees in drama and English from the University of California, Irvine, and formerly worked in publishing.

Her debut novel, In the Shadow of Blackbirds—a YA ghost tale set during the World War I era—is now available from Amulet Books/ABRAMS. She currently lives outside of Portland, Oregon.