Just last week, while I was away, the sequel to Malinda Lo‘s heart-pounding, gripping, sexy Adaptation series, Inheritance, entered the world—and now that I’m home I have an interview with Malinda to celebrate its release! I’ve asked Malinda to answer some of my favorite author interview questions, and here’s what she said…

NRS: I’ll start with the dreaded question you may be hearing from strangers on elevators, long-lost family members, and your doctor while you’re sitting on the examination table in the paper gown during a checkup: “So what’s your next book about?”

Inheritance is the sequel to Adaptation. The duology (with bonus ebook-only companion novella Natural Selection!) is an X-Files-inspired science fiction thriller about what happens when birds start attacking airplanes, sending them crashing to the ground. Why are the birds doing that? Why is all the information about the crashes being wiped from the internet? Is the president of the United States telling the truth? And seriously, is that a bisexual love triangle? (Yes. Yes it is.)

NRS: Did you learn any deep, shocking truths while working on this novel—about writing in general, or about yourself?

ML: I learned that my favorite thing to do as a writer is to set my characters down a path that seems like it’s going really well, and then to completely pull the rug out from beneath them. I think it’s because I had two books and about 900 pages to set them up and knock them down. By the time I got to the climactic portions of Inheritance, I’d been waiting to get there for about 700 pages (counting Adaptation) and I could not contain my evil authorial glee!

I think this is just part of becoming more conscious about my writing, though. With every book I write I become increasingly aware of the tools and techniques I have available to me, and I get really excited about using them.

NRS: Do you ever write fiction snatched from real life—your own, or someone else’s? Is there a secret or not-so-secret piece of this novel that came from something we may not realize is “real”?

ML:  Yes. I don’t get this question much because I’ve written fantasy and science fiction, but of course, parts of my books come straight out of real-life experiences I’ve had. However, I’m not going to tell which parts! I reserve the right to write a memoir someday, and then people can try to match things up if they want.

NRS: What is the single worst distraction that kept you from writing this book? How did you overcome it?

ML:  The internet! I have all sorts of tricks for avoiding being sucked into the internet, but mainly I use Mac Freedom, which is this software that disables all access to the internet on my computer for a set amount of time. I’ll set it for up to three hours, and even if I click on my internet browser by accident, no websites will load. Also you can’t disable Mac Freedom once it’s running except by forcing your computer to shut down, and that freaks me out because I’m worried I’ll lose data, so I never do that. I use Mac Freedom all the time.

NRS: Imagine you’re on the subway, or the bus, or sitting in a park somewhere minding your own business… and you look up and see the most perfect person you could imagine devouring your book. This is your ideal reader. Set the scene and describe him or her (or them?) for us.

ML:  It would be Gillian Anderson or David Duchovny reading Adaptation or Inheritance with the cover easily visible, preferably while on a stakeout in a black car, and I would totally photograph them with my phone and tweet it immediately.

(Seriously? I think I’d be super excited to see anyone reading any of my books in public. I’ve never seen that before!)

NRS: What do you know now that you wish you’d known as a debut author?

ML: Not much. I feel like part of being an author is experiencing a kind of gradual disillusionment with the job that forces you to genuinely engage with why you want to write at all. That sounds grim, but it’s actually not. Most debut authors are filled with a natural enthusiasm and excitement because it’s their first book—and I wouldn’t want to diminish that joy. Having your first novel published is a wonderful thing that should be treasured.

By “disillusionment” I mean coming to understand the nuts and bolts of the business, which can seem really mysterious and sort of fantastical before your first novel comes out. It’s all deal announcements and cover reveals and book tours—until you learn what goes into making a deal, creating that cover, or negotiating those public appearances. It can be quite difficult to deal with all this prosaic, financially minded reality, but the fact is, if you want to be an author with a long career, you’re going to have to learn how to deal with it.

The biggest challenge for me (and probably for many authors) is learning how to balance those often frustrating business matters—plus a lot of public judgment—with nurturing the creativity you need in order to keep writing. Every author has to figure out what works for themselves, and that takes time. It would do no good to know everything at once, and in fact it would probably be terrifying. You need to work your way through it gradually.

NRS: If you had to pick one sentence, and one sentence only, to entice someone to read your book, what would it be?

ML: This was so hard! In Inheritance most of my favorite sentences are dialogue that either make no sense outside the context of the scene, or are too spoilery for me to post. But I did find one sentence I really like that’s in one of my favorite scenes, and it’s about the liminal space that occurs between choices, and maybe more broadly, the liminal space of adolescence itself. Anyway:

“For a moment it was like being suspended in time—just the two of them in this room, divorced from everything that had come before, poised on the brink of what might come after.”

Malinda Lo is the author of several young adult novels including most recently the sci-fi duology Adaptation and Inheritance. Her first novel, Ash, a retelling of Cinderella with a lesbian twist, was a finalist for the William C. Morris YA Debut Award, the Andre Norton Award, and the Lambda Literary Award. Her novel Huntress was an ALA Best Book for Young Adults and a finalist for the Lambda Literary Award. Malinda lives in Northern California with her partner and their dog. Her website is www.malindalo.com, and she tweets @malindalo. 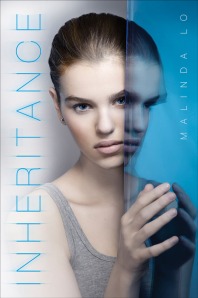 One winner was chosen to receive a set of signed hardcovers of both Adaptation and Inheritance, and that winner is…

Congrats! I’ll be in touch for your address so you can claim your prize!

If you’re a YA or middle-grade author with a new novel coming out by a traditional publisher and you’d like the chance to answer some of my interview questions to celebrate your release, let me know!