The Books of THE WALLS AROUND US

There is one thing—well, a few things… but here’s just one—that I’m often asked about The Walls Around Us, and it’s about the books mentioned within the story. The books that appear in the library of the Aurora Hills Secure Juvenile Detention Center. The books that Amber wheels around on her book cart to each of the young female prisoners, to see if they might like to pick a title to read today. Here’s more on how and why I chose the books that appear in the story… 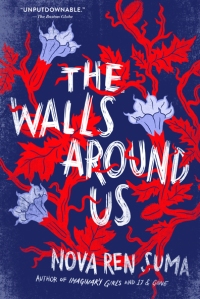 “Most girls weren’t too interested in spending voluntary time flapping the pages of some stale, old book, but there was always someone needing the escape like a gulp of fresh water in the desert. Besides, not every book in our library was old. Some were fresh faced and still had the new-paper smell, and reading a new book before anyone else got to was like getting the first hot lunch and not the murky, lukewarm depths of the middle of the line, or, worse, canned-bean cold like the last few trays.

“Some were books we shouldn’t have even had, judging by the well-thumbed sections paged down for sharing, but thinking of what some girls did under cover of a strategically draped blanket while reading a certain section of The Clan of the Cave Bear made me squeamish. The point is, every book we had could save us in a different way—only, we had to open it. We had to drop our eyes to the page and drink in the words that were there.”

—Amber, in The Walls Around Us

One of the questions I asked myself while writing The Walls Around Us was what would my crime be, if I were one of the girls locked up in Aurora Hills at thirteen or fourteen or fifteen? What might I have done to end up behind those walls?

Out of all the characters, Amber was the one I related to the most. I, too, had a stepfather I wished could have vanished from our lives, and I, too, found an escape in books and clung to them for many years as if they were a life raft. If I’d committed the crime Amber is accused of, if I’d found myself spending the rest of my teenage years locked up in Aurora Hills, I would have handled my time much the way she does: That book cart would have been my saving grace, my most precious thing.

Maybe it’s because of this that the books Amber and the other girls encounter on the book cart and in the prison library were books I encountered at some point in my life, books that made an impression on me somehow, books that mattered. Every book mentioned has some kind of personal connection or resonates to a piece of my past in some way. Clan of the Cave Bear is the book we passed around and read to pieces in junior high (corners turned down at certain passages). Same with the Sweep series when I was a fully grown adult working in a publishing company and a group of us got addicted to the delicious series about witches. I slipped in some of my current favorite authors (Libba Bray, Jacqueline Woodson, Sara Zarr) while acknowledging Sister Carrie, a book I was forced to write an essay on in an independent study my senior year of high school that ended up breaking my heart in a definitive way. Isabelle Allende is there. Sylvia Plath is there. Zora Neale Hurston is there. And how could I not mention Jane Eyre, one of my favorites as a teenager, the book I chose for my acting class final presentation? My monologue was a scene from when young Jane was locked, so cruelly, in the red room. I was a terrible actress, but I performed with great conviction.

There are also the books called out in the epigraphs. It felt fitting to begin with Margaret Atwood, because she’s where my life as a writer began: I discovered her books on my mother’s shelves when I was twelve years old, and they are what inspired me to put my own words down on the page.

In The Walls Around Us, the story in a book is sometimes all a girl may have to herself in the world, now that her freedom has been taken away. I understood this deeply when I was thirteen, fourteen, fifteen. I would have been the girl in Aurora Hills who gravitated toward that book cart, who read every single title in that library at least once and probably more, who found an escape route in those pages… and stayed as long as she could. Surely that’s why I write books today.

What three books would I want to be locked away with in Aurora Hills and read and reread for eternity? Hmm… Probably The Wind-Up Bird Chronicle, whatever Libba Bray is writing right now (you and I know it will be genius) and, for old time’s sake, The Handmaid’s Tale. How about you?