This guest post is part of the Turning Points blog series here on distraction no. 99—in which I asked authors the question: What was your turning point as a writer? I’m honored and excited to host their stories. Read on as Julia DeVillers tells the amazing story of how a fan letter she wrote an author when she was ten years old ended up changing the course of her writing life years later…

When I was ten, I wrote a fan letter to an author and he wrote me back.

In fifth grade, I read a book by Frank Bonham called The Missing Persons League. It was about a boy searching for his missing mother and sister, set in a pre-apocalyptic world of oxygen deficiency and world food shortage. 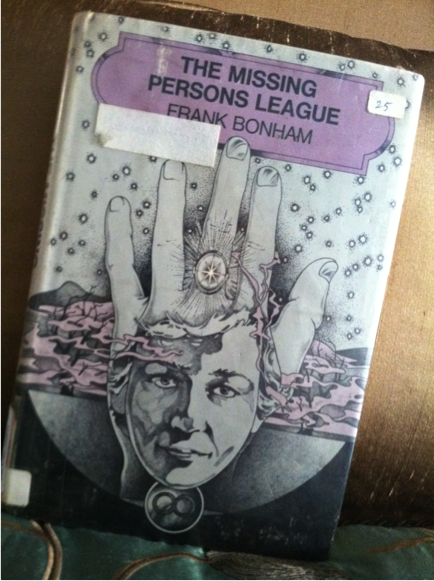 It was an unusual choice for me because it was science fiction, and I was in a hardcore Judy Blume/Ellen Conford/V.C. Andrews phase. But something about The Missing Persons League resonated with me. The main character writes a “fan letter” to an author, and I decided I’d write a fan letter to the author, too.

I didn’t know I’d want to read science fiction, but I loved your book….”

And he wrote back:

I didn’t know I’d want to write science fiction, either. In fact, I didn’t even know I’d write for young readers at all.”

Frank told how he had been writing adult books for decades (westerns and pulp fiction) before he surprised himself by turning to young adult books. As you can see from this excerpt, he also was wonderfully conversational about my hometown (Albany, NY), a possible sequel, and the dangers of smoking. 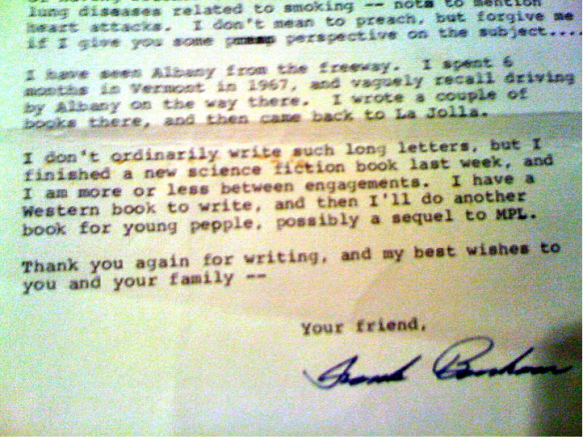 I must have asked him to tell me more because in the next letter, Frank told me how he had really challenged himself when he decided to write Durango Street, because it was set in Watts, in a world previously foreign to him, and many people at the time.

Over the next few years, Frank and I wrote back and forth. I told him about middle school, my guinea pigs[1], and how my English teachers were sucking the life out of writing. He told me about his birds, California, and he encouraged me to keep writing.

Flash forward to a new century. I had continued writing, and had published two nonfiction books for teens. Nonfiction was a natural fit for me. I received a master’s degree in journalism from Ohio State, where I learned to answer the Ws (whowhatwhenwherewhy) at breakneck speed. I was the go-to research maven in any office. “Ask Julia to find out,” was the refrain before Google stole my glory. Researching, interviewing people, and synthesizing what I’d unearthed. Perfect for nonfiction.

Important aside: I’m not saying nonfiction is easy by any means, lord no, and many nonfiction authors are those I respect most in our field. That’s not my point.

My point is that nonfiction was so obviously my genre, because writing it was, well, comfortable. Sure, people suggested I try fiction[2]. But writing fiction—much less trying to get it published—I realize now, meant I would lose control. Fiction was opinions, not just facts. It meant not just reporting, but interpreting. Not simply sharing others’ words from an interview but actually creating characters, giving voice to my own people who had something to say. My own voice, not others.

That was scary. And uncomfortable. So, no fiction for me, I would reply.

Then, as I was in the middle of writing a nonfiction pitch for my next book, my Turning Point happened. My twin sister had a baby. My intention was to fly out to stay with her and help out with the baby. That would be an all-consuming task, I figured, so I didn’t bring my research books or notes or even my own computer. But my sister had medical complications and with her nurses, husband, and our mom in the house, I was superfluous or in the way. I went over to my mom’s and started going through the boxes stored in her basement. I found my old diaries, photos, and keepsakes.

And the original letter from Frank Bonham[3].

Yeah, life was uncomfortable. I was worried sick about my sister and her baby[4], I was away from home without my work to distract me. And I’d been going through childhood memories, so my life was flashing before my eyes. My emotions were raw and on the surface as I read the words from teen me from my diaries.

And I sat down at my sister’s computer and started my first novel. It wasn’t comfortable. But I thought about what that might be telling me. I knew the voice of my character, too. It was of the girl whose diaries I’d been reading. Teen me.

And I wrote the first four chapters of what would become my first middle-grade novel: How My Private Personal Journal Became a Bestseller. A book about a teen whose hopes and dreams mirrored what I had written in my own diary (but wouldn’t happen in real life. However, in fiction…).

Dutton was the original publisher of The Missing Persons League by Frank Bonham.

I’ve been writing fiction ever since.

“While observing the problems [in urban culture], I had been vacillating between writing an adult fact book or a book for young readers. I finally decided that the book should be addressed to youngsters, for older minds too often have already set hard within their forms. Children’s minds, on the contrary, are as sensitive as sea anemones. Drop an idea in them, and they enfold and consume it, or else reject it. But at least they taste it.”

Julia DeVillers writes nonfiction and fiction, including: the TRADING FACES identical twins series with Jennifer Roy, the LIBERTY PORTER, FIRST DAUGHTER series, and LYNNVISIBLE. She currently lives in Saratoga Springs, NY, after her year in the former Soviet Republic of Georgia.

EDITED FEB. 8: WINNERS OF HOW MY PRIVATE PERSONAL JOURNAL BECAME A BESTSELLER AND DOUBLE FEATURE ANNOUNCED!

Thanks to everyone who entered and to the author for giving away her books. I’m now here to announce the winners of this giveaway!