This guest post is part of the Turning Points blog series here on distraction no. 99—in which I asked authors the question: What was your turning point as a writer? I’m honored and excited to host their stories. Read on as Megan Crewe reveals how she found the courage to transform her life…

The biggest turning point in my life was something that on the surface might not seem to have anything to do with writing at all, but would have completely changed the course of my writing career if I’d decided differently.

For you to understand why the decision was so difficult, you’ll need to know a little about me.

All my life, I’ve adored stories. As a preschooler, I’d dictate stories to my mom for her to write down in stapled “books” I’d then illustrate. By the time I was in my teens, I was writing one or two novels (which while great practice will thankfully never see the light of day) every year, amid academics and various extracurricular activities.

I applied the same self-discipline to school. I did my homework without being reminded, spent library time researching projects while other kids were goofing off. I knew I could do well if I tried, and I’d have felt ashamed to turn in work that wasn’t up to my own standards.

My parents encouraged both sides of my personality: the creative and the studious. They made sure I kept in mind that most authors held down a second job to make ends meet. I grew up accepting that I’d better get the best education I could, so I’d have the most possible options while I kept writing on the side.

In the same way, I accepted that I was obviously going to go to university. I was near the top of my class, and got into a BA program on full scholarship. When I picked psychology as my major, I knew I’d also be doing grad school. There were very few jobs in the field for anyone with less than a master’s degree. It was the only option that made sense.

Now, I’d loved school as a kid. By high school, my enthusiasm was waning: too much busy work, and too many other things I wanted to be doing. University turned out to be better, because I had so much more choice when it came to classes—and because I realized I could skip many of the parts I disliked without it hurting my marks. If a professor who bored me always taught straight from the textbook, I started leaving during the breaks in the middle of lectures. If I found a tutorial leader unengaging and there weren’t participation marks, I rarely went to that class’s tutorials. I still enjoyed hearing lectures from enthusiastic professors who clearly knew their subjects. I still took pride in handing in essays I’d thought long and hard about. But my tolerance for all the less-enjoyable parts of the educational experience was dropping rapidly.

I should have recognized this as a warning sign, but since I was still getting good marks, it didn’t occur to me that anything was wrong. I was just adapting to my situation, that was all. In my fourth year, I became depressed to the point that I started taking medication, but I attributed it to other causes. Even when I had to attend monthly meetings with a psychology professor’s grad students and left each one so frustrated with how little actually got done I was ready to scream, I accepted them as a necessary evil.

During my last year, I applied for the grad program I was most interested in, and was turned down.

Since I was confident in my marks and references, I figured the issue was that the program was geared toward working with teenagers, when almost all of my experience was with younger children. (I’d wanted to switch focus, and hoped I could get away with it.) Obviously I just had to build some more experience, and then apply again next year, to programs more suited to my work history. No problem.

I’d been too busy or too exhausted to write much when I was juggling university and a part-time job. Now, suddenly, I had time. I was working, but it was still part-time, and it didn’t leave me with readings and assignments I had to complete after I left. Before long, I finished the first book I had enough confidence in to query agents with, and got several requests, though no offer. I started writing and sending out short stories regularly, and within a few months made my first major sale. It was an amazing feeling, to know that people who didn’t know me actually wanted to read—and pay for!—my writing.

But as the deadline for reapplying to grad school approached, I couldn’t help noticing my happiness fading. I felt increasingly apathetic about everything, including my writing, like when I’d first become depressed. Whenever I focused on anything related to the applications, I felt sick to my stomach. I told myself that was normal, that I’d get used to being in school again, that I needed this in order to get the right kind of job. That it was something I just had to do.

I let things go on like that for several weeks before I finally asked myself, Is it really?

Just allowing myself to consider that question gave me the most incredible sense of release. That, more than anything else, told me I’d been going about this all wrong. I’d been assuming I’d go to grad school for so long that I’d seen anything else as failure. The fact that I knew my family expected me to continue my education was an additional pressure. But when I let myself be honest about it, I knew the last thing I wanted was to give up at least two more years of my life on something that would clearly make me miserable.

Did it mean my job situation was going to be more shaky? Well, yes, but I knew I could make enough money to get by. I could always reconsider in the future, if my writing hadn’t started providing more income. What was really important to me was giving that writing a chance. Giving myself a chance to keep living a life that was making me happy.

Once I’d come to terms with my change in thinking, the hardest part was telling my parents. My dad got angry with me for the first time in at least a decade, and ranted about how I was ruining my future before stomping off because he couldn’t even handle talking to me anymore. (To my surprise, my mom, who’d always seemed more concerned about issues like education and money, took the news a lot more calmly.) But the decision felt so right I didn’t waver. By the next time I went to see them, he’d started to come around.

About six months later, I started working on a new novel. That book, which came to be titled Give Up the Ghost, got me my first agent a year later, and my first publishing deal a year after that. 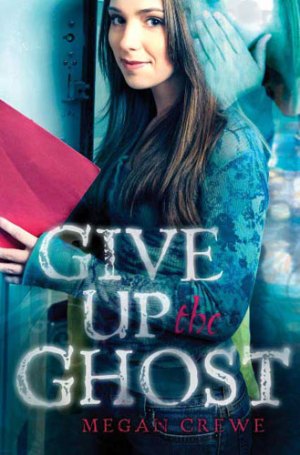 Like many authors, Megan Crewe finds writing about herself much more difficult than making things up. A few definite facts: she lives in Toronto, Canada, with her husband and three cats, she works as a behavioral therapist for children and teens with special needs, and she’s spent the last five years studying kung fu, so you should probably be nice to her. Her debut novel, the YA paranormal Give Up the Ghost, was released in 2009. Her YA post-apocalyptic novel The Way We Fall (the first in a trilogy) has just come out.