This guest post is part of the Turning Points blog series here on distraction no. 99—in which I asked authors the question: What was your turning point as a writer? I’m honored and excited to host their stories. Read on as Kim Purcell reveals how she removed the distance between her and her character and found a way to love her novel again…

My big turning point came at a time when I hated my main character. Even worse, I hated myself for creating her. My debut novel, Trafficked, is about a girl named Hannah who comes from Moldova to LA to be a nanny and ends up a modern-day domestic slave. When I first started writing the novel, I really liked Hannah. She came to me as this sarcastic, funny, kind soul, but then, even though I thought she was pretty neat, I decided this just wouldn’t do.

She was a victim. Any person who’d been trafficked and enslaved would have to be weak, right? I wanted to be “realistic.” So I made her into this frightened, weepy character, and then I sent her down a path of misery during which one thing after another would befall her. Oh, your life doesn’t suck enough, yet? How about this? I felt like I was beating an injured horse.

After a few years of writing, I no longer liked her at all and I didn’t know what to do. I’d made her into this person that made you cringe. When I brought her to my writing group, they said, well, it’s good writing, but will readers want to stick with this miserable story for three hundred pages?

But then, I sat down with my miserable story and I felt miserable. I thought it was shit. I didn’t know why. I’m not normally overly critical about my writing. I generally believe that if I keep writing, it will get better. The problem was that after two, three, four years, I still wasn’t feeling the magic.

Writing became a chore. It was an important story, I told myself. I had to keep going. But every time I sat down with my character, it just felt like a bummer. Her life was so awful, I couldn’t stand it.

So, I decided I was going to quit the book. I switched to another novel-in-progress, but I kept thinking about Hannah and how I’d abandoned her and not just her— by not telling this story, I’d abandoned all the people who are enslaved around the world. That made me feel even shittier. What kind of person does that?

I talked to my husband and my writing group. They told me to keep going with it, that they liked the story and they believed I could do it. So I returned to the story, rewrote it a couple more times, and somehow, miraculously landed a fabulous literary agent. I could not believe it. That was it, I thought. I’d sell it and be done with the miserable thing.

The thing that I didn’t know was that I was far from done with it. My agent and I went through a couple rewrites and she sent it out to the first round of editors. They found it too bleak. A couple of the editors didn’t like my main character. I felt ill. I didn’t like her either. I mean, she was okay, but I wouldn’t want to be her friend. It was a dark night of the soul. Either I had to admit defeat, or I had to rewrite from scratch. After five years of working on the novel, which I was sick of, rewriting it from scratch sounded like hell.

This was the big turning point for me. The novel became interesting to me again. I decided if I was going to rewrite Hannah, I had to get rid of the distance between my character and myself. I couldn’t be safe. I had to be able to inhabit the character in order to care for her and make readers care for her. I had to de-victimize her and make her a survivor.

Over the next year, I rewrote the novel from scratch, keeping the basic plot, but changing the character and her reactions to everything that happened. While I wrote, I thought of all the girls and women I met in Moldova. I thought of the nannies and housekeepers and immigrants I’d interviewed here in America. They were smart, funny, and determined to live in a vibrant way, despite everything that had happened to them, and I put their collective spirit into Hannah.

Not once was I bored, depressed, or disheartened. I was on a journey and when it was finished, at last, I felt proud of the work I’d done. My agent and I were ready to send it out again. I felt like I was at last linking arms with Hannah and walking with her to her next destination, instead of tossing her at the first editor who’d take her off my hands and relieve me of the burden. 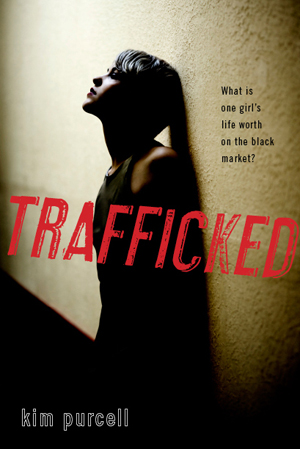 A few days later, I was on the F train, heading to Brooklyn from Manhattan. I was talking about the book with some friends. I spoke passionately about Hannah and her story, and while I talked, I noticed a woman watching me a few seats over. I had no idea, but this woman was an editor at Penguin. She got off the train at my stop—we lived close to one another at the time—and she said, “Excuse me.” She said she was sorry for eavesdropping, but she was an editor and she’d love to read my novel. She handed me her card. I looked down at the card, which read Penguin. I couldn’t believe it. I sent it to her and Viking bought it a few days later.

Now, just this month, the book has come out. Hannah’s story will be heard. The story of slaves across America will be heard. And none of this would have happened if I hadn’t been willing to rewrite from scratch and allow Hannah to be strong in order for her story to come alive.

Kim Purcell is a novelist, journalist and teacher. As a radio beat reporter, she interviewed drug dealers, prostitutes, and murderers and became interested in the trauma many of them experienced as children and teenagers. She wanted to tell their stories in a more complex way, and decided to focus on writing novels while teaching English as a Second Language. She wrote two novels before Trafficked. After hearing the painful stories some of her immigrant students shared with her, she became interested in the subject of human trafficking and modern-day slavery. She traveled to Moldova, the poorest country in Europe, to research this book. She had two babies and wrote it mostly when her two wonderful daughters were napping. She loves to run, do yoga, and dance in random places, like elevators. Sometimes her husband and kids stop her and sometimes they join in. They all live in Westchester County, near New York City, with their rescue dog, Lola.

Amy @ Kissed by Ink won a signed copy of Trafficked by Kim Purcell! Congrats! I’ll email the winner to ask for a mailing address. Thank you again to everyone who entered!