This guest post is part of the Turning Points blog series here on distraction no. 99—in which I asked authors the question: What was your turning point as a writer? I’m honored and excited to host their stories. Read on as Jaclyn Dolamore talks about making things that seem impossible happen… 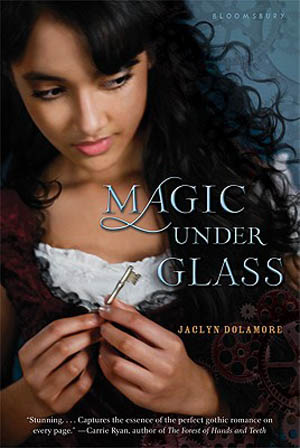 Sitting down to write a blog post like this, you have to review your whole life in brief, looking for where the turning point actually was. Usually I think of it as the moment I sold Magic Under Glass. Well, the moment my agent sold Magic Under Glass. Which is kind of the problem with that as a turning point. It was a huge turning point for my life and I could tell you all about how I sent 100 queries and rewrote the book twice and found critique partners and read Self-Editing for Fiction Writers and all the work that led up to it.

But when I really think about it, turning points happen first in the mind. Once in a while, amazing opportunities and life changes fall into people’s laps. But usually they don’t. Usually life is a bit of a rut. This is what I do, this is where I live. If you’re lucky, you’re exactly where you want to be.

In 2005 I was not where I wanted to be at all. I was young. But not so very young that it didn’t feel like something better should be happening. Some of my friends were at great colleges, and one of them was a professional comic book artist, while I was directionless. I wanted to be a writer in theory, but I wasn’t doing the work at all. Being able to BE a writer, to do what I loved and get paid for it, felt impossibly far away. I knew that every year, agents and publishers received KAJILLIONS of manuscripts and they only accepted a few. I was one of those kids who got a lot of attention from adults growing up, because I could write and draw and speak articulately and use big words. Life is often hard for those kids when they grow up. “Hey, you’re a kid who isn’t stupid!” is no longer enough to make you feel like a winner. You have to actually DO something. And deep down, I wasn’t sure I could do it, I guess. I was afraid of failure, although it wasn’t a very conscious fear. It just felt like a resistance to meaningful action.

Before you can get to the point where your life actually changes, I think you have to actually believe it can change. And maybe that is the hardest part sometimes. If you don’t actually believe your life can change, why do anything about it? At first it feels like an uphill battle. You click “send” on a few e-queries and sit there nursing nausea and a sense of hopelessness. It feels like there is SO MUCH between you, a writer sending your first query, and a published writer with books on the shelf. Getting a request for pages back on my first batch of queries helped. I started to treat writing like it was my job. Writing became my default task for my days off. No reading or TV-watching or anything else was to be done until I sat in front of a document for a couple of hours, whether I wrote a few sentences or 3,000 words. But I still sometimes had trouble imagining it happening. REALLY happening. There were no guarantees it would ever happen. Just a lot of work, a few years of it, while I made more and more writer friends and saw more of them sell books, and every time they sold their debuts, it felt a little more like I could sell mine too, but it also brought a huge wave of doubt that maybe I just wasn’t quite good enough, that maybe being “the smartest two-year-old in Oviedo, Florida!” would have turned out to be my life’s peak.

Selling Magic Under Glass was a huge accomplishment, but even then I was stuck in the rut. I was born and raised in central Florida, but I never liked the place. My family took us on a lot of road trips. I was enthralled with mountains. At the low point of my young retail days I was standing alone in the lingerie department of Sears where I worked and I started thinking of mountains and how I hadn’t seen them in two years and I just went into the stock room and cried. I felt so trapped and miserable. If I could just afford to take a trip to the mountains, I thought, I could keep living, but as it is, what the HELL AM I DOING?

I had no idea how to get there. It would take a lot of money and a lot of steps. I was hugely overwhelmed.

This time, at least, I had learned a little bit of a lesson from Magic Under Glass. I knew that things that seemed really impossible could happen. And I knew that the way to make them happen was to just believe they were possible and start behaving as such even if you had NO clue how to get there at the moment. So I started spending hours investigating different towns and their available housing stock. I checked out books from the library about how to buy a house to learn about the process. I used some of my advance money to take a trip to Maryland to check it out. My partner grew up in Baltimore and he thought Maryland would be a great place for us. I loved it there from the start. The next year we took a trip to Pennsylvania to check out some other areas. “Next time we visit we’ll have a Realtor,” I said, even though I still didn’t have anywhere near the kind of money to buy a house.

I was right. The price of houses continued to fall, and meanwhile I sold my next book for enough money for a down payment on a house. That makes it sound so easy. But…let me rephrase. Enough money for SOME kind of house. I still struggled constantly with my fears about the process—could I get a loan, could we actually find a house in our price range that we loved enough to make that kind of commitment, could we really afford it with all the associated costs that were hard to calculate until you were kind of IN IT, from hiring movers to paying heating bills? We had already accepted that we had to look around Hagerstown, which was 70 miles from DC and Baltimore. I didn’t really mind that, it wasn’t like we had day jobs in the city and it is darn pretty in Washington County. But we were still looking in a pretty low bracket. After looking at a baker’s dozen of houses in one day, houses I had been watching for weeks or months on real estate websites, houses that APPEARED to be the best choices around, I felt sick and I cried. I didn’t want any of them. 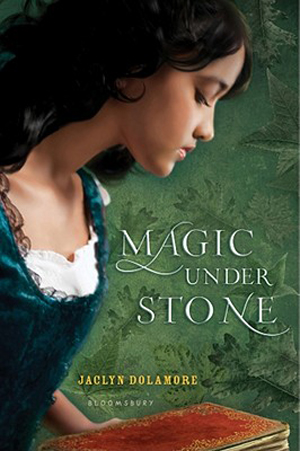 Luckily my partner tends to have a clearer head when I’m losing it. He really loved a Victorian house, the last one we’d seen. It had pretty much everything on our wishlist. It was the ONLY house that had almost everything on our wishlist. We looked at it again, and after having a night of sleep to clear my own head, I fell in love with it too. We made an offer. The loan worked out. I’m sitting in that house right now writing this. I love it even more now that it’s mine.

So now I have the career I want and the house, too. I can still hardly believe it. But there are still unfulfilled dreams. Things I worry and worry over because I don’t know how they will happen. But it’s starting to get easier. At least I know where to start. I just have to believe it’s possible.

Jaclyn Dolamore is the author of Magic Under Glass, Between the Sea and Sky, and Magic Under Stone. She spent her childhood reading as many books as she could lug home from the library and playing elaborate pretend games with her sister. She has a passion for history, thrift stores, vintage dresses, David Bowie, drawing, and organic food.

EDITED MARCH 17: WINNER OF A SIGNED COPY OF ONE OF JACLYN DOLAMORE’S BOOKS ANNOUNCED…

Megan Ratliff won a signed copy of the book of her choice—and she picked Magic Under Glass! Congrats! I’ll email the winner to ask for a mailing address. Thank you again to everyone who entered!